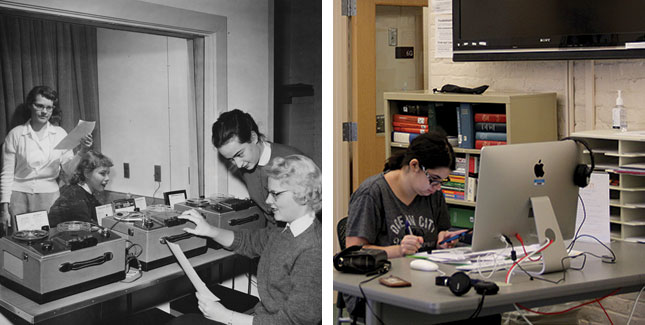 Language study in labs beyond the classroom was first introduced at Mount Holyoke in 1947, and for more than a decade the services offered and facilities available shifted often to reflect a growing student population and to incorporate new technology.

By the early 1960s, students had access to gooseneck microphones and headphones that allowed them to record and practice pronunciation outside of class periods. Using a crude system called “dial access information retrieval,” students could also “dial into” recordings of their choice. As the decade continued, various language departments experimented with developing technology and updated recording equipment to aid in students’ progress.

In the mid-1960s, more formal language laboratory opportunities were introduced, and French department records reveal that in 1964 intermediate classes had fourteen to fifteen students per session, a number overwhelmingly higher than students studying other languages.

The 1965 construction of Ham Hall offered students a language lounge and tape recording facilities in the dorm, and in 1969, with students’ growing interest in the study of languages, chairs of the Spanish, Italian, French, German, and Russian departments signed a statement calling for a revitalization of the language lab technology.

Today, the Ciruti Center, converted into a language center in 1989, houses the College’s Language Resource Center (LRC). From online language tutorials to collaborative spaces offering foreign newspapers and spaces for conversation, the LRC fosters a multitude of different learning styles. Students can not only practice their skills with language lab assistants but also with native speakers around the world through video conferencing, or they can create virtual communities using tools like Skype.

After class hours, students can use self-study language tools like Mango Languages and Rosetta Stone, which teach practical communication skills online. Simple headphones and microphones of the past have expanded into a dizzying array of headsets, lapel microphones, and keyboard skins that overlay the traditional Latin alphabet for different writing systems, including Russian, Arabic, and Hebrew.

Multimedia resources including video cameras and editing software facilitate collaborative learning. A dramatic change from the dial-access retrieval system, this technology offers students the ability to incorporate iMovie productions and other digital narratives into class projects, making the LRC a space where students come together to study languages that seem never to stay the same.

This article appeared as “Language Labs” in the fall 2017 issue of the Alumnae Quarterly.