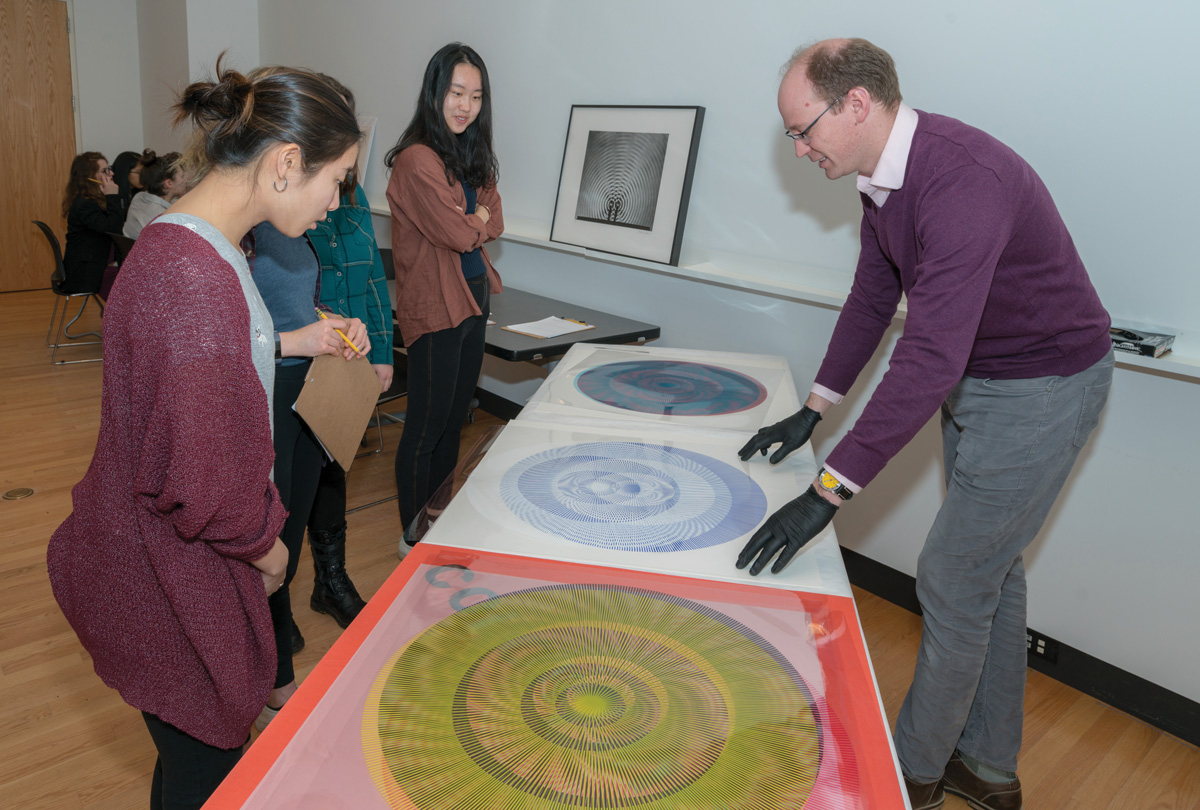 For the past 10 years, Mount Holyoke students across disciplines have been engaging with art through a program that brings classroom work to the Mount Holyoke College Art Museum, where curriculum and the visual arts meet. Concepts at the heart of physics — quantum mechanics, relativity, entropy, chaos theory — are best learned through reading, class discussion and lab experiments — and, sometimes, the visual arts.

“Physicists get excited about these deep ideas that are sometimes hard to explain without a whole bunch of mathematical baggage,” says Assistant Professor of Physics Spencer Smith. His 2018 general education class Interweaving Themes in Physics and Art is just one of many in recent years to bring art into the classroom — and the classroom to the Mount Holyoke College Art Museum.

The Museum, long a haven for art history majors, is now a thriving — and vital — part of the academic experience for students like those in Smith’s course. Drawing from its vast collections, the Museum promotes visual learning in disciplines beyond the arts and humanities through its Teaching with Art program. Initially launched as a three-year initiative with funds from a 2009 grant from the Andrew W. Mellon Foundation, the program was endowed with support from Susan Bonneville Weatherbie ’72 and additional funding from F. Chaney Li ’64, Betse Cannon Gump ’56 and Harriet Farber Friedlander ’52. 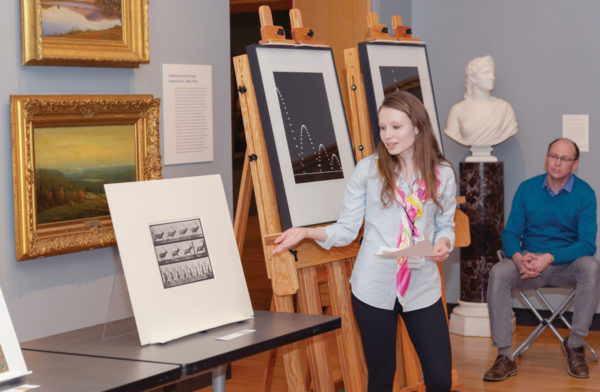 Physics student Anne Bevin ’20 explains how time and motion are encoded in a photograph by Eadweard Muybridge.

The idea that campus museums would focus on a college or university’s teaching mission and involve faculty and students from the social and hard sciences (such as physics) has grown in popularity in recent years, says Ellen Alvord ’89, the Museum’s associate director for engagement and Weatherbie curator of academic programs. It has been a successful endeavor at Mount Holyoke, she says, “because the faculty prioritize interdisciplinary learning and embrace the idea of using art and material culture in innovative ways.”

“Indeed, it is this commitment to cross-disciplinary learning,” says Tricia Y. Paik, Florence Finch Abbott Director of the Museum, “that has inspired our Museum donors to support this forward-thinking program. Thanks to their crucial investment, we have been able to build upon and expand our fruitful collaborations with faculty.”

“By creating this course,” physics professor Smith says, “I wanted to short-circuit the technical physics explanation by saying, OK, a lot of these ideas have some aesthetic resonance, and you can find almost analogous ideas or themes when talking about art. Visual art is something people feel they can talk about — or at least it is a little bit more approachable as compared to physics.” In practice this means Smith might invite students to consider a painting or a photograph and recognize that it is related to time, for example, but then dig further, asking them to consider: How did the artist intuitively think about time and represent it in their art? What does that tell us about the reality of how time works? With some topics, such as chaos theory, the comparison might be less direct.

“It’s a lot easier to start that conversation by saying, ‘Look at these pictures. What draws you in?’ There’s often this aesthetic tension between order and chaos in artwork that intrigues us,” says Smith. Students in Interweaving Themes met at the Museum every Friday, and for the final project, each created a virtual exhibition, acting as curator by pulling together images from collections all over the world, as well as at least one artwork from the Museum’s holdings.

The idea for Smith’s course grew, in part, out of a three-semester faculty seminar, Teaching with the Original, which was organized by the Museum and held over three consecutive semesters beginning in January 2017. Museum staff often host interdisciplinary seminars for faculty to introduce them to the collection and special exhibitions and to give them strategies for object-based teaching, says Alvord. During Teaching with the Original, Smith introduced fundamental physics concepts through artwork to other faculty participants, giving him the chance to try out different pedagogical approaches to teaching symmetry, time and flow. The seminar gave him the opportunity to launch his course as a kind of  trial run before formally teaching it for the first time in 2018.

Smith’s former student Emma Grotto ’19, a computer science and physics double major whose mother is an artist, was thrilled by the opportunity to participate in Smith’s class.

“I realized that science was another way to appreciate art,” says Grotto. In a paper on light, for example, she illustrated the concepts of the visible light spectrum, absorption and emission, with the work of Narcissus Quagliata, an Italian visual artist who made the world’s largest stained-glass ceiling, and Diet Wiegman, a Dutch multidisciplinary artist known for his shadow art sculptures made of trash. For her final project, Grotto illustrated string theory — hardly an easy subject to conceptualize — using both sculptures and paintings. Grotto says she has a new appreciation of how scientific discoveries and art have influenced each other over time and adds that the small-group work in class was particularly enriching, with the students familiar with physics learning from those who were not, and vice versa.

“That was valuable, because you don’t get those types of perspectives in other settings,” says Grotto. Classmate Caledonia Wilson ’19, a math major who had experience with drawing and painting in high school but never studied art history, agrees. Before enrolling in Interweaving Themes, Wilson had only been to the Museum for her first-year seminar, but having the chance to go there every week and talk about art in the context of physics allowed her to examine some of her own “contrarian, baked-in beliefs [about art]. And it gave me a broader respect and overview of movements in art history, as well as [the ability to trace] different lines of scientific thought through history, which is not a perspective I’d had in other science classes,” she says.

“I realized that science was another way to appreciate art.”Emma Grotto ’19

It’s not only the physics department that is taking advantage of the Museum’s resources. Associate Professor of English and Chair of Theatre Arts Amy Rodgers routinely brings classes there, in part because it accommodates different learning styles. 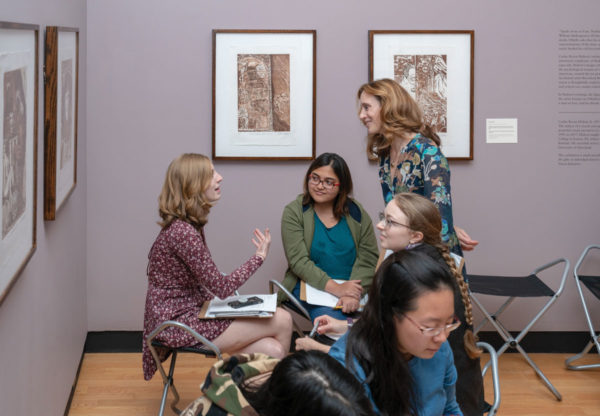 “You might have a student who is not as strong in close reading with texts, but you’ll put them in front of an image and they’ll be able to talk about it in incredibly creative and vibrant ways. It often reveals to me how they comprehend the world, and I can [then] help them advance their analytical skills with texts,” says Rodgers. “It’s important to have students exercising both the analytical and the creative sides of their brains. I don’t like to think about those two things as separate. When they’re working in tandem is when human beings are working at their highest levels. The Museum is a great outlet for that for students — and for me as an educator.”

Students of Mathematics Professor Jessica Sidman looked at ways to use math to analyze and create art — including calculating the optimal distance for viewing artworks — in her course The Mathematics of Perspective Drawing. Likewise, students in Place and Power in the American West and Pacific World, a class taught by Associate Professor of History Christine DeLucia, studied Edward Curtis photographs, landscape paintings, fruit crate labels, Alaskan ivory figures and works made by indigenous peoples of North America to better understand the history of that region. The Museum staff routinely hosts many first-year seminars as well as introductory biology classes, including a lab where students spend three hours honing their observation skills. The concept was based on a similar program at the Yale Center for British Art, which brings the university’s medical students in to build their observation skills as part of their training.

“We think about the components of observation, what kinds of biases do we bring when we’re looking at something, what kind of cultural knowledge and background do we bring that might help us understand something or might actually get in the way of how we’re interpreting something,” says Alvord. “And then the students make connections between what they did in the Museum with what they’re doing in biology class.” 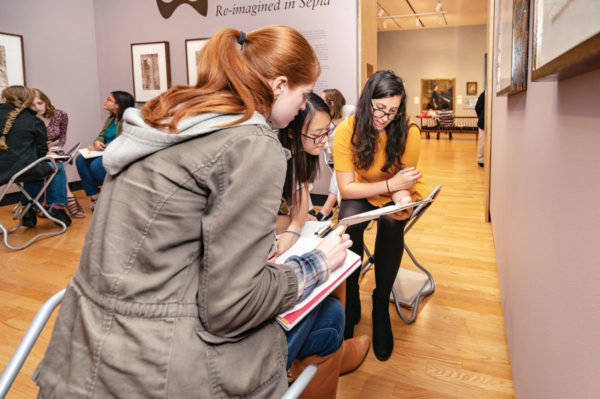 Students workshop label text to be included in the exhibition as an assignment for their Activist Shakespeare course.

An exhibition on display at the Museum through June 2020, “Major Themes: Celebrating Ten Years of Teaching with Art,” simultaneously commemorates the program and explores some of those connections.

Alvord and Associate Curator of Education Kendra Weisbin regularly search the course catalogue for courses that might be a good fit with the Museum’s holdings or a forthcoming exhibition. They do so keeping in mind the College’s 10 learning goals, which include evaluating evidence, developing critical and analytical thinking skills, questioning assumptions and engaging in artistic expression.

“Ellen and Kendra have been proactive about reaching out to faculty and trying in particular to get faculty who aren’t traditionally engaged with the Museum to come down there and use the objects they have in the collection in their classes,” says Smith. Sometimes it works the other way around. A few years ago, Associate Professor of History Desmond Fitz-Gibbon brought students in a British history course to the Museum and discovered a trove of coins and currency; in response, he developed a 200-level class, Histories of Money. And from those class visits, Fitz-Gibbon and Aaron Miller, associate curator of visual and material culture, developed Money Matters, an exhibition on view until June 21.

“The show has been enlightening, because it brings together so many disparate objects that you might not associate with money,” says Alvord. The exhibition includes not only ancient coins and bills but a playing card, shells, jewelry, a bill of exchange and a $20 bill that’s been modified with a stamp of Harriet Tubman’s portrait. “It gets us to think about not only economic implications of money but social and cultural and political aspects as well.”

Equally rich are the many special projects that have been coordinated among faculty, students and the Museum. Rodgers, for example, created an “American Moor” residency in fall 2018. The play, written and performed by Keith Hamilton Cobb, examines the perspective of black men in America today through the lens of a black actor auditioning in front of a white director for the role of Othello. Alvord brought to Rodgers’s attention a series of etchings of Othello by printmaker Curlee Raven Holton that are among the Museum’s holdings and invited Rodgers and her students to write labels for the works, which were then exhibited to coincide with Cobb’s time on campus. Then, in a roundtable hosted by Rodgers, Holton and Cobb discussed the significance of Othello in 21st-century America. A year earlier, Smith had served as co-curator for “Beautiful Physics,” an exhibition of mid-20th-century black-and-white photographs of physical phenomena by Berenice Abbott. In turn, he invited members of the Society for Physics Students to join him in writing labels to hang next to the photographs. The student labels went far beyond a minimalist listing of artist’s name and title of the work, providing deeper explanations of the physics at work in each image.

“We used to think, ‘What’s the best art we have to put on view?’” says Alvord, reflecting on the Museum’s evolution. “Now we ask students and faculty to help us think critically about how we make value judgments. What are the stories that we’re telling in these spaces?”

Learn about how the Mount Holyoke College Art Museum is partnering with local schools.

Sarah Zobel ’88 is a Vermont-based writer and editor whose work focuses on health and medicine, education, and housing and homelessness.

This article appeared as “Learning Beyond the Classroom” in the winter 2020 issue of the Alumnae Quarterly.