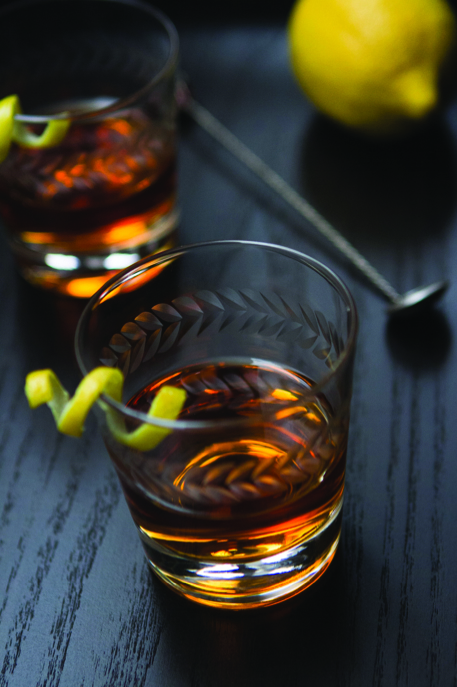 The Sazerac is a local New Orleans drink, composed of cognac or rye whiskey, absinthe or Herbsaint, and Peychaud’s Bitters.

For nearly half the twentieth century, when women in New Orleans wanted to drink the famous Sazerac cocktail—a mixture of whiskey, bitters, and absinthe—they had to wait until Fat Tuesday (Mardi Gras), the only day of the year they were allowed in bars. Yet on September 26, 1949, a group of thirsty women stormed the Sazerac Bar at the famous Roosevelt Hotel and demanded to be served. Taken aback, the bartender obliged, and from that day forward women were welcome in drinking establishments around the city.

The Mount Holyoke Club of Louisiana hosted a get-together in this historic locale in September, celebrating MHC sisterhood alongside the right for women to “partake” in public watering holes any day of the year. Alumnae stopped by to network, socialize, and reminisce.

In addition to area alumnae, a special group of friends from the class of 1973 joined the celebrations. These alumnae had traveled to New Orleans from around the country, and were pleased to find an MHC club event occurring during their stay. Joanne Henig ’73, Beth Burgeson ’73, Wendy Leys Rudolph ’73, and Deborah Allen Carey ’73 were in town to attend the wedding of the son of their former classmate, Maida Magee Riess ’73, who passed away in 1999. The groom had personally reached out to his mother’s friends, saying that their presence at his wedding would make him feel as if his mother were in attendance as well—a true testament to how far the MHC bond extends.