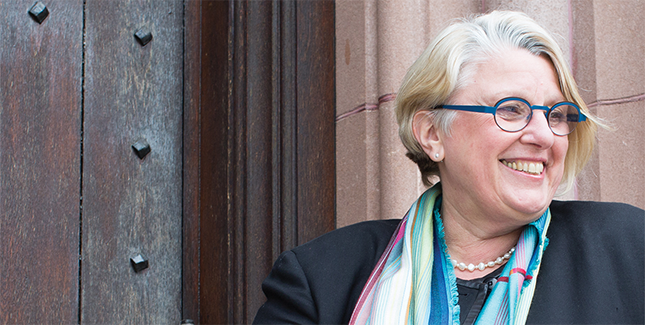 As I step into the position of acting president, I am more reflective than usual about the long history of the College and symbolism of the threshold. In the early days of Mount Holyoke, when one student, arriving at the new seminary, found no steps leading up to the entrance, she walked around to the back of the building, where Mary Lyon greeted her with the words: “Come right up the stairs. You have come to help us.” And there is something still important today about that sense of collective endeavor.

Earlier this year, in a conversation with faculty about what makes Mount Holyoke distinctive, one professor recounted a story about a visitor’s surprise when someone held the door open for her. The student holding that door had responded: “This is Mount Holyoke. We open doors for each other.” There was a collective sense of recognition in this narrative about Mount Holyoke—a sense that, in both the literal and figurative senses, this is a place where mutual respect, support, encouragement, and, of course, the challenge of the new enable all members of the College to do their best work and to be their best selves.

One of the joys of Mount Holyoke is to see the many ways in which alumnae open doors for each other and for those around them.
Sonya Stephens

Opening a door for someone, as Madeleine Kunin, former—and first female—governor of Vermont, has pointed out in a blog post published by the Huffington Post, is more than the physical act of holding a door; it is a split-second decision to make a connection, to engage in an exchange, and to acknowledge another. In a collaborative learning environment, this stands, of course, for so much more, and, though Kunin is at pains in her short blog to make this former act of chivalry gender neutral, here at Mount Holyoke it can be seen as a feminist act, and especially so when it carries the symbolism of creating opportunities for another perhaps hindered by prejudice or discrimination. It struck me, too, that alumnae lining the path to Mary Lyon’s grave during the laurel parade are representative of a similar passage, marking both an important connection and the very real sense, evoked by Kunin, that, “I am not walking through this doorway alone—someone has gone before me and someone will go after me. I’m not the only one in this space. If I hold the door for you, will you hold it for someone else?”

One of the joys of Mount Holyoke is to see the many ways in which alumnae open doors for each other and for those around them, as well as for the students that follow them. So it is on campus, with Mount Holyoke doors—of historic significance and beauty, of every shape and size—being opened to us by others, and leading to new discoveries, both intellectual and personal.

My own journey to and through a women’s college was the result, first, of a high school principal showing me a door and holding it open long enough for me to see something I might seriously pursue and then easing my passage through the many seemingly closed doors to follow and, second, of faculty and peers, who continued to show me possibilities and to encourage me to seize them. Very often, it was much more than a split-second act of kindness, and they ended up accompanying me in the discoveries that ensued from their sense of an opening.

We all have much to learn from one another and much to gain from opening doors for each other, as well as for those around us.