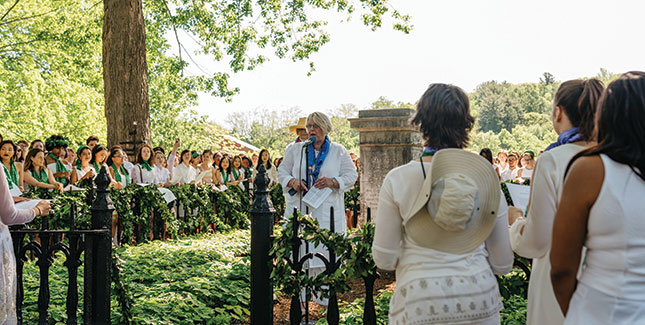 It is an inescapable and heartwarming truth about Mount Holyoke that we are invested in a tradition of traditions. At no time in the academic year, and at no moment during the career of a student, is this more apparent than during the commencement exercises. Not for nothing did one person, about halfway along the path of this year’s laurel parade, offer up a box of tissues. We laughed at her prescience, knowing that, as the new graduates reached the generous ranks of the fiftieth-reunion class of 1967, who were lining the way to Mary Lyon’s grave, there wouldn’t be a dry eye in the parade.

With each ceremony and event, the seniors are a step closer to the inexorable conclusion of their time as students at Mount Holyoke.Sonya Stephens

The laurel parade is already a sort of culmination, marking the moment that the graduating class is entered on the roll of the Alumnae Association and joins the lineage assembled to welcome them. By the time of the laurel parade, the graduating students have toasted their success with strawberries and champagne on Pageant Green; they have been “scarved” by their connections class; if they are students of color, they have recognized college mentors in the Stoling Ceremony; and they’ve attended the Last Lecture, given by a faculty or staff member they’ve selected who inspires. With each ceremony and event, the seniors are a step closer to the inexorable conclusion of their time as students at Mount Holyoke—living, moment by moment, and in newly intensified ways, their connections and successes. Emotions are high, and yet more is to come, not only in the commencement ceremony itself but in the contemplation that is Baccalaureate, and in the “communitas” of the magical Canoe Sing (as well as all that precedes it). These ritual-inspired emotions create a common bond—a bond forged by the suffragist-honoring white of our clothing, the placards of the parade, and the sharing of class histories at the alumnae meetings.

This article appeared in the summer 2017 issue of the Alumnae Quarterly.