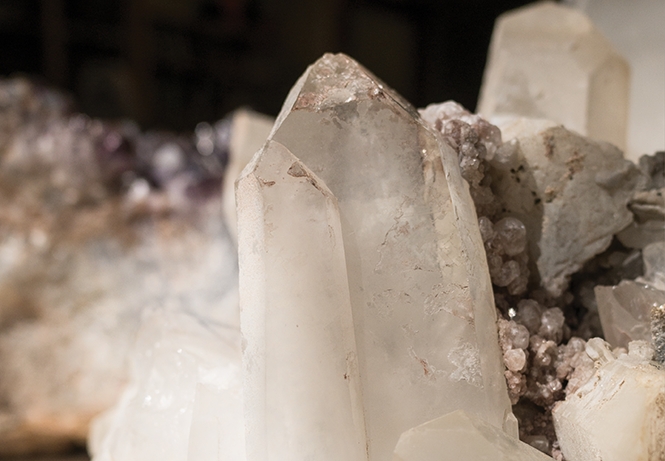 Jacqueline Mosher FP’09 grew up amid her parents’ expansive collection of more than 1,000 rock and mineral samples. A few years ago, as she was cleaning out her late mother’s house for an impending sale, Mosher came across three family heirlooms: a cluster of milky quartz crystals from Lyndhurst, Ontario; a deep purple Brazilian amethyst; and platy calcite, also from Brazil. Faced with finding a place for these rare specimens, she reached out to Mount Holyoke geology professor Steven Dunn, with whom she had worked in 2010, when she had given other specimens to the department. After speaking with Dunn, Mosher decided to donate her finds to the College, where they would be accessible to educate and inspire both students and faculty.

A religion major at Mount Holyoke, Mosher formed close relationships with professors Jane Crosthwaite and John Grayson as well as with faculty members outside of her major. Because of these connections, reaching out to Professor Dunn was a natural step when looking for a special place to house the exceptional specimens. Sharing them with Mount Holyoke was, she says, a perfect fit. To her the specimens represent growth, potential, and harmony with the natural world—characteristics she feels the College embodies.

To view the specimens, visit the third floor of Clapp and look for display cards that read, “Donation from the Collection of William and Liane Mosher—from Jacqueline L. Mosher, FP 2009.”

One response to “Rare Minerals Added to College Collection”