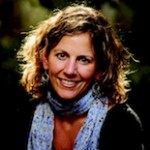 Sadie Quarrier ’92 has had a busy couple of weeks. Working with the editorial team, she’s been putting the final touches on the layout of a story for an upcoming issue of National Geographic magazine. Months of work have gone into preparing that story and the fifteen to twenty others Sadie works on at any given time.

“Things come in waves,” says Sadie, who is a senior photo editor at the magazine.

Sadie’s schedule may be busy but let’s face it—lots of people would give their eyeteeth to work at one of the most compelling magazines anywhere; one whose deeply evocative photos and insightful stories have moved generations of Americans since 1888 to better understand the fast-evolving world around them.

Putting a story together for the magazine usually takes twelve to eighteen months. Sadie looks at upwards of 30,000 photos per story and eventually works with the photographer to choose the best forty to fifty images to show the editor. They’ll then collaborate with the designer on the final picture choices and layout.

Like most magazines, National Geographic has seen its print circulation decline and its Web site expanded dramatically. “These are both scary and exciting times for us the print industry as a whole,” says Sadie. “If we can financially survive this shift to new media, what makes a great National Geographic story—excellent photography and compelling storytelling—will not change, whether we’re on a future Apple tablet or some other cool device.”

But, she adds, “I’m guessing there may [always] be people who still treasure thumbing through the printed magazine.” And that suits her just fine.—M.H.B.