Is That You, Emily Dickinson? 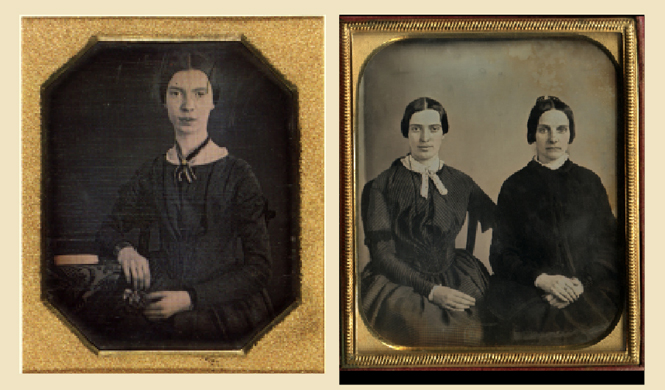 Scholars and scientists compare the only authenticated image of Dickinson (left) to the newly surfaced daguerreotype (right).
Images courtesy of the Emily Dickinson Museum and the Amherst College Archives and Special Collections

While the one authenticated image of Emily Dickinson has become an iconic portrait, for the past 125 years scholars and enthusiasts have only been able to peer into the eyes of the inscrutable poet as a sixteen-year-old, nearly twenty years before she produced some of the most celebrated poetry in American history. Recently, though, a private collector acquired what may be a second daguerreotype of Dickinson, taken c. 1859–1860. Believed to be near the age of thirty, Emily Dickinson (class of 1849) would have sat for the picture roughly ten years after she left Mount Holyoke. The image shows two women seated side by side. The woman on the right is confirmed to be Kate Scott Turner, a widow and close friend of the Dickinson family. Seated on the left is our mystery woman, purported to be Emily.

While it remains unverified that the image is in fact of Dickinson, at least one expert has weighed in and claims that this is no phony. Susan Pepin, director of neuro-opthalmology at Dartmouth Medical School, conducted a careful comparison of the early, confirmed daguerreotype with the newly discovered one. Dickinson had astigmatism in one of her eyes, making her pupils asymmetrical, a trait that is apparent in both images. Other physical similarities exist, such as the shape of the right earlobe and the alignment of the area between the nose and upper lip. Clothing may be an additional indicator of identity, as the dress worn by the woman on the left is about a decade out of style (in line with what we know of the reclusive poet), and the fabric in the photo closely matches a swatch owned by the Emily Dickinson Museum.

All of this adds up to the promising prospect that the woman on the left is the one of the most enigmatic personas of the literary world. Amherst College and the Emily Dickinson Museum are continuing their investigation with further clothing and image analysis.

2 responses to “Is That You, Emily Dickinson?”