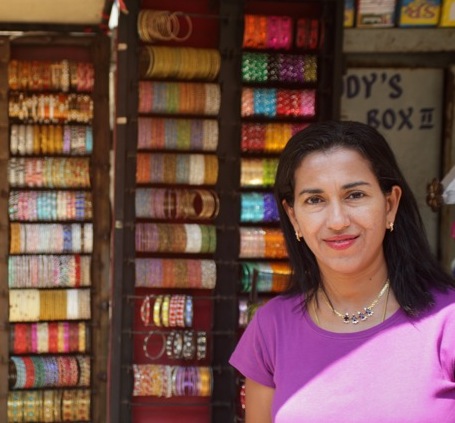 Shoba Narayan, class of 1988, has worn many hats in her life so far—acupuncturist, sculptor, psychology student, wife, and columnist. For this, she blames Mount Holyoke. “I went from being interested in psychology to majoring in sculpture, so the fact that I could choose a path that was very different from what I had aspired to, and thought I would become, was freeing and gave me a lot of courage.” By a twist of class-scheduling fate, Narayan found herself in Professor DeLonga’s advanced sculpture class as an inexperienced art student. It turned out to be a perfect fit: after Mount Holyoke she went on to graduate school in sculpture. “It’s cliché to say the college changed my life, but it really did.” Now she holds a master’s degree from the Columbia University Graduate School of Journalism. She is a regular columnist for “The Good Life” in Mint, the Indian branch of the Wall Street Journal. Even today her many interests intertwine, such as her passion for food and her occupation as a writer. Her book Monsoon Diary (Random House, 2004) is described as “a fascinating food narrative that combines delectable Indian recipes with tales from her life, stories of her delightfully eccentric family, and musings about Indian culture.” Her best advice: zigzag. “Don’t be afraid to fail, take courage.” Narayan has recently published a new book called Return to India.