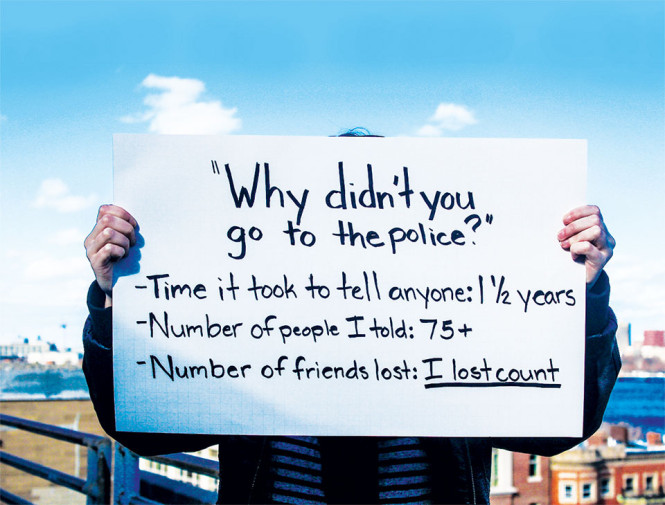 This semester Ali Safran ’14 is managing a nonprofit from her dorm room in South Mandelle. Incorporated in June, Surviving in Numbers raises awareness about sexual assault and domestic violence, in part through displaying a collection of anonymous submissions—photos of survivors holding up posters with accounts of their experiences. The stories are often distilled into a list of powerful statistics written boldly in permanent marker on white poster board. “8 years since the assaults. 10 countries visited. 2 sisters I taught about consent. 1 college degree. Countless # of friends and loved ones who support me,” reads one sign. The idea for the project came about in October 2012 after Safran revisited the spot of her own attack, where she hung a poster with sexual assault statistics on a nearby fence.

Initially Safran displayed these collected posters in format on college campuses in Massachusetts, including in the Student Art Gallery at Blanchard last fall. A year ago she also began posting the submissions online at survivinginnumbers.tumblr.com (the site has since moved), and she has plans to expand her campaign to more colleges, with spring 2014 displays and talks scheduled at UC Berkeley, Temple University, and Emerson College.

During her first year of college, which she spent at Boston University, Safran was immersed in the legal process against her own assailant, a process that didn’t result in the justice she had sought. “I felt like I wanted to do more to solve the problem, and I wanted to help other people through similar situations,” she says. She turned to activism and became a rape crisis counselor, and soon after Surviving in Numbers was formed. Originally, she aimed to show the pervasiveness of sexual assault on college campuses.

So far Safran has received almost 400 submissions, from as far away as Turkey and Italy and as nearby as dorms on campus. The project has helped survivors, who have written to her to say the poster-making process prepared them to tell their stories to the police or family members.

In December, Together for Girls, a global partnership, listed Safran as one of fifty heroes ending sexual violence against children, a list that includes Hillary Clinton, Eve Ensler, and Queen Noor of Jordan. In April 2013, Gov. Deval Patrick of Massachusetts wrote to Safran, congratulating her on her efforts and wishing her well in continuing them. The project has been featured in The Daily Mail, The Huffington Post, and Buzzfeed.

A year-and-a-half into her original campaign, Safran’s goal has shifted from awareness of the prevalence of sexual assault on campuses to prevention. Since last summer she has been developing a high school curriculum that focuses on preventing sexual assault. The program launched in February at Newton North High School, Safran’s alma mater in Newton, Massachusetts. If successful, she hopes to expand the curriculum to other schools in the area.

A politics major, Safran will continue her work with Surviving in Numbers post-graduation. She also hopes to work professionally “in some type of legal setting where I can help with policy-making around sexual violence, whether that’s within the justice system, education system, or elsewhere,” Safran says.