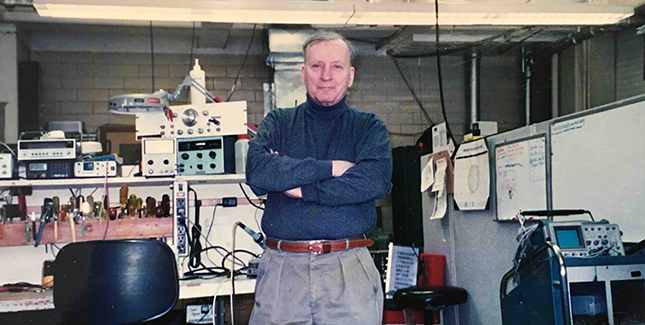 Professor Emeritus Curtis Smith died on February 15 at the age of 93. After serving four years in the US Army during World War II, Smith attended the University of Chicago, where he earned his undergraduate degree and his doctorate. He arrived at Mount Holyoke in 1955 with an exceptionally broad background. He was a gifted experimentalist and had physics, chemistry, optics, and electronics as well as physiology and anatomy at his fingertips. He had a flair for designing and building equipment to meet any challenge, for any thesis or course in the sciences. He loved to repurpose government surplus, which he regularly harvested from a depot in Taunton, Massachusetts. For decades, there was hardly a piece of equipment in the biology department on which Smith had not put his personal touch.

Perhaps most important to Smith and to his students was his teaching, nourished by his unshakable belief that every student wanted to learn. He was a founding member—and then chair—of the College’s neuroscience program. At first his experimental work was at the intersection of biochemistry and neurobiology, but later he studied higher mental functions, especially memory. His book, Ancestral Voices: Language and the Evolution of Human Consciousness (1984), weaves together many strands of biology, neuroscience, and cognitive science.

Smith participated in the development and teaching of several interdisciplinary courses. He taught Information Theory before that subject was widely recognized and was one of the early adopters of personal computing at Mount Holyoke. For a while, his personal computer was a gigantic Army surplus UNIVAC that filled the longest wall of his lab.

During his career Smith supervised eighty-two honors theses, never turning away a student. In 2001, nineteen years after he retired as the Norman Wait Harris and Emma Gale Harris Foundation Professor of Biological Sciences, he taught his January Term course, The Structure of Memory, for the last time, to sixty-seven students.

Smith was interested in everything, but nothing brought him more joy than his family. His wife of fifty-two years, Elaine, passed away in 1999, leaving him bereft. In 2007 Smith found happiness again in his marriage to Dana Feldshuh Whyte ’60, who survives him. He is also survived by a sister, three children, a stepson, and their families, including many grandchildren and great-grandchildren.

—By Stan Rachootin, professor of biology