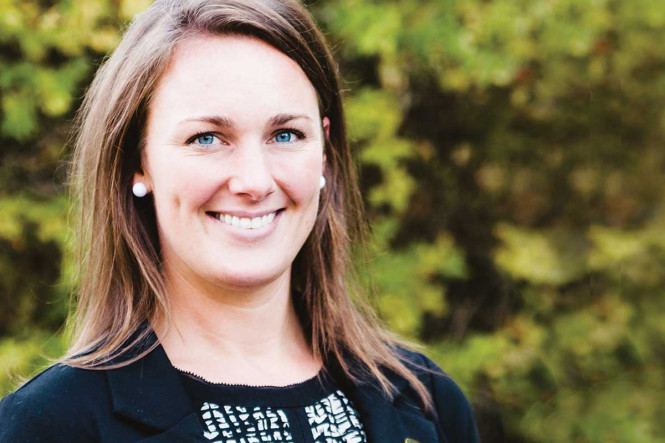 Since June 2012, Lutes has led the Fulbright Commission for Educational Exchange between the United States and Belgium. The youngest executive director in the program’s sixty-six year history, she holds three master’s degrees—in European policy and politics, peace building, and international business—from University of Leuven and previously worked on Wall Street.

At each stage that an opportunity comes along, I reassess my goals and revise my plan.

On her journey to the corner office:

When I arrived on Mount Holyoke’s campus in the fall of 1998 as a prom queen from New Jersey I had very different goals than I do now. I never thought I would work on Wall Street after graduating, and I certainly never thought I would spend almost a decade living in Belgium. At each stage that an opportunity comes along, I reassess my goals and revise my plan.

On mentorship and self-sufficiency:

It’s easy to take for granted the close connection that Mount Holyoke fosters among students and the faculty and administration. After you graduate it can be difficult to find mentors and advisors who have your best interests in mind. You need to know the difference between people who want to help you and people who might take advantage of you. I’ve learned how important it is to know how and when to stand up for myself.

On living in Belgium:

Every day I speak three languages, and every day something in Belgium surprises me. Brussels is like the DC of Europe, with more than forty-five headquarters for intergovernmental organizations and 159 embassies. I live in a charming city called Leuven, with cobblestone streets and castles. I teach spinning classes in my spare time, and recently I acted in a Flemish soap opera, of all things.

I’m still working out where I will go from here. As I get older it becomes a little more complicated to think about things like, will I live in Belgium forever? Do I want kids? If so, in what country should they be raised? (Don’t forget the generous social welfare state I pay into each month in Belgium!

Read more about alumnae in their careers.

Each month, students and alumnae are invited to follow the Twitter hashtag #MtHolyokeAtWork as an MHC alumna tweets about her day, gives advice and information about her career, and answers questions from followers. See a recap of the alumnae who have participated in this program.

One response to “Ten Minutes With Erica Lutes ’02”