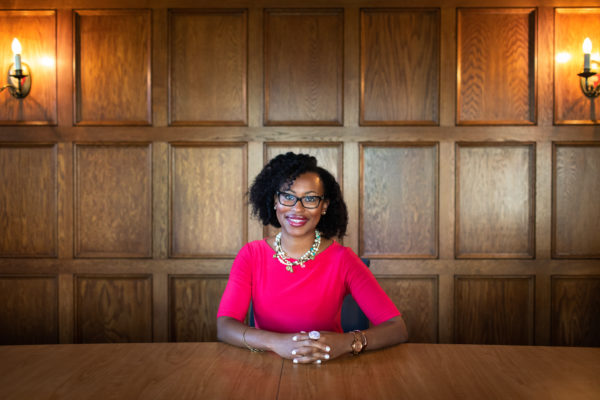 From the age of nine, Markeisha Miner ’99 knew what she wanted to be when she grew up: a lawyer. After Mount Holyoke, where she majored in African and African-American studies, she attended the University of Michigan Law School and soon landed a job as clerk to the Honorable Anna Diggs Taylor, the first African-American woman to serve as chief judge of the Sixth Circuit. Then, after a few years working as a commercial litigator in Dickinson Wright PLLC’s Detroit office, Miner took an academic turn, serving as assistant dean of career services at the University of Detroit Mercy School of Law. In 2015 she became the dean of students at Cornell Law School, a job she loves. “I walk down the hall and hear languages from all over the world,” she says. “It’s a rich tapestry of a diverse educational environment.” Miner serves on the Alumnae Association Board of Directors and has also been a member of the organizing committee for the Black Alumnae Conference, held on campus every three years. “I always come away from these conferences and the campus re-energized and engaged,” she says. “It allows me to reconnect with who I wanted to be when I was at Mount Holyoke.”

I visited as a high school senior, and the minute I stepped on the campus I knew it was where I was supposed to be. When I was out for the preview weekend, there was all sorts of activism on display on the green, including the Clothesline Project (an organization that brings awareness to violence against women and children), and a student reading from her anthology of poetry about the African diaspora. I called home and told my mother, “These women are smart, they’re articulate and they’re leaders.” And mom said, “Well, maybe that’s the place for you!”

On her career choice:

I see myself as the chief advocate for students from orientation to convocation — and everything in between, including the transition from students to alumni. So, I’m their contact for wellness and support, crisis management, student organizations, leadership development, diversity and inclusion and academic counseling. There is never a dull moment!

On the rewarding aspects of her job:

I’m working with incredibly smart, talented new lawyers in training — people who are going to shape the profession. Having a role in the start of their careers is incredibly rewarding. As a first-generation student — my parents went to college but couldn’t afford to finish — there was so much I didn’t know. It’s exciting to be able to help these students to figure out that there are many different paths to achieve their goals and to determine which one best fits their needs at this particular point. Also, I remind them, just because you choose this particular path now, doesn’t mean you can’t go down other paths later.

On sharing both ups and downs:

In environments like Mount Holyoke or grad school we see people’s accomplishments, but we rarely see people’s challenges. For many, that can lead to feelings of inadequacy. I think women, in particular, need to be honest with one another about how we’ve gotten to where we are. The ramifications are significant for people looking up to us.

This article appeared as “Chief Advocate for Students” in the fall 2018 issue of the Alumnae Quarterly.