The Maven: Telling Your Family’s Story 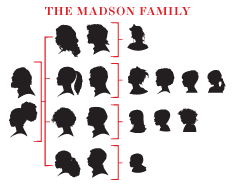 With the advent of genealogy-focused television programs such as TLC’s Who Do You Think You Are?, The Genealogy Roadshow, and Henry Louis Gates’s African American Lives series on PBS, genealogy is reaching a much broader audience than ever before. Online family trees have proliferated, and online genealogy services are popping up and adding content every day. Why the new wave of interest? In our increasingly mobile and virtually connected world, people are seeking ways to feel rooted to something a little less fleeting, a little more permanent—home, history, and personal identity. Here is how you can get started researching your family’s ancestry:

That box of papers you inherited from your grandmother. Photo albums and scrapbooks on your parents’ shelves. Your own filing cabinet. Gather as much information as you can from resources you already have at your fingertips. Birth and marriage certificates, military papers, family Bibles, newspaper clippings, yearbooks—all of these records found at home are rich sources of genealogical information. Your local public and university libraries can also be a good place to start.

Once you’ve collected some basic family information, use a free, online family-tree service like Geni.com or Ancestry.com to assemble your data in one easy-to-use place. Start with skeletal information like dates of births, marriages, and deaths. Take stock of the information you’re missing. Don’t forget to interview living family members for stories and information you might not know.

No matter where in the world your research is focused, FamilySearch (familysearch.org) is the best place to start, with millions of records and hundreds of research guides and tutorials, all available at no cost. Another good free resource is Cyndi’s List (cyndislist.com), a directory of hundreds of thousands of genealogy websites, catalogued by topic and geographic area. If you’re ready to invest in a subscription service, Ancestry.com (ancestry.com) is one of the best sources of genealogical research material. You can also check regional or state archives for digital collections; many local archives have vital records certificates and other records available online.

Names and dates are key components of successful genealogical research, but by themselves they reveal little about an individual’s life. Use federal census records (available at familysearch.org) to construct a family timeline in ten-year snapshots. Take note of details on occupation, income, veteran status, and citizenship as well as street addresses, neighborhoods, and even neighbors’ data. A marriage record tells about the marriage between two people, but it also offers details  about their parents, their religion, even their friends. (Usually a marriage has a witness—who witnessed your grandparents’ marriage?) Compare dates with major historical events—which wars, financial depressions, or political upheavals did your ancestors experience? Read up on their communities’ local histories. What events and circumstances framed their lives? Newspaper articles and even court cases can add texture to ancestors’ stories. Teasing out the not-so-obvious details in the records you find is what can help you to reconstruct your ancestors’ lives, and this, ultimately, is how you can begin to relate to them and the lives they led.

Are you a maven?

Pitch us your area of expertise at quarterly@mtholyoke.edu.

One response to “The Maven: Telling Your Family’s Story”