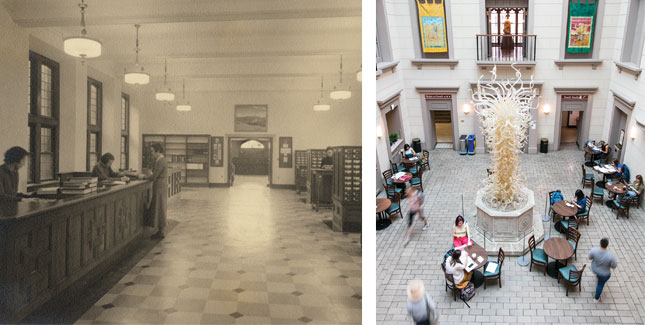 In 1935, as students accessed the Williston Memorial Library from the doors opposite Clapp Hall, they entered on the same floor as students do today, but the center of the building was divided into levels, and lighting was provided on each level by hanging lamps rather than skylights.

The ground floor was split into several rooms, including at least three coat rooms, one designated for faculty. A large room, labeled “staff” on the floor plan from the time, was presumably an office or meeting space for College employees who worked in the library. The ground level also included a kitchenette and a student bathroom.

One floor up, the “delivery room,” as it was called on the floor plan, featured a curved wooden circulation desk and rows of card catalogue cabinets. Walking through this area students could reach the main reading room.

A second floor, which could be accessed by a balcony in the reading room or by the main marble stairs upon first entering the library, included several rooms labeled “study” on the floor plan as well as a room for “maps and charts.” The balcony is no longer accessible, as the space is now fully open from the ground floor to the glass-paneled roof, but the stairs that led to the balcony remain and can be ascended to imagine the space in a previous layout or simply to offer a new view of the iconic reading room.

Called the “court” on the redesign plans, the Williston Memorial Library atrium has existed in its current architectural layout since 1992, when a major renovation designed by well-known architect Graham Gund opened the space previously sectioned off into levels. The space is still accessed through the Clapp Hall-facing entrance, and the original entryway feeds into an open, neoclassical atrium, with a clear view to the glass-paneled roof, complete with white brick walls and a stairway that leads to direct access of the fourth-floor main reading room. The main circulation desk is on the right, just off of the atrium and leading into the Miles-Smith library addition, also completed in 1992.

The centerpiece of the current area, which serves as a popular study and social spot for students, professors, and other campus community members, is the twelve-foot-tall, almost incandescent “Clear and Gold Tower” glass sculpture by Dale Chihuly, installed in August 2013 in the sixteenth-century marble wellhead from the island of Murano in Venice. The atrium has since become one of the most photographed spots on campus. 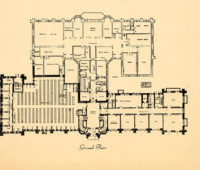 Floor Plans Through the Years

This article appeared as “Library Atrium” in the winter 2018 issue of the Alumnae Quarterly.