Then and Now: Convocation 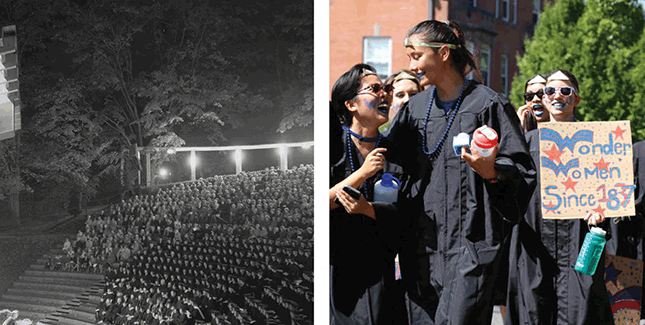 As had become a tradition at the College, students gathered in the amphitheater at the start of the semester for a benediction and a ceremony that included a welcome to students and announcements of honors, preceded by a choral performance of Bach.

There were approximately 1,600 students in attendance on that fall day, with 430 in the incoming class. President Gettell told them that the role of the College and its students was to “face the facts of the human predicament . . . and to seek out all the ways to make human beings and the world they live in just a little bit better.”

In 1964 President Gettell told students that “discontent can be the most positive force there is for social progress and individual fulfillment” and urged them to use their college-inspired worldview to better the situations they might find themselves in.

Convocations of the present are lively, jubilant, colorful events.

Still held outside in Gettell Amphitheater, seniors come loosely attired in their gowns—and a few wear their caps, too—with costume themes visible and prevalent. Photos, which are shared online through various channels, trumpet Mount Holyoke pride and feature a sea of students dressed in their class colors, with even hair, cheeks, and lips colored red, green, blue, and yellow.

The president’s address and the gathering in general continue to focus on accomplishments of students and faculty as well as kudos for the College itself, and campus goals are outlined and set in the context of world events.

This fall, on a ninety-four-degree morning in early September, the senior class—dressed in all shades of blue—paraded into the amphitheater, cheered on by their underclass peers. President Lynn Pasquerella ’80 addressed the enthusiastic group, prefacing her formal remarks with, “We’ve missed you. A college campus without students is like peanut butter without jelly . . . or Lower Lake without Jorge!” 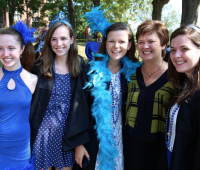