Wendy Xa ’93: A Preschool for Lulu 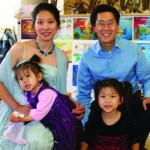 If you don’t live in San Francisco, you probably haven’t heard that finding a preschool in my fair city can be a true parenting headache. Openings are scarce. The competition can be fierce. In fall 2007, when my daughter Lulu was two, my family waded into the great preschool hunt. We started by attending an open house in Golden Gate Park, where hundreds of preschools had pitched their tables. It was there I ran into classmate, Wendy Xa, seated at one of those tables.

Wendy was a few months away from opening a brand new preschool in the city, and it was everything I wanted for my girl. Lulu has been learning Mandarin from my mother since she was born, so I was looking for a Mandarin immersion school. I also had researched some of the schooling philosophies out there and knew that Reggio Emilia—which emphasizes in-depth exploration, and allows children’s curiosity to motivate and drive learning—appealed to us. Wendy’s school had both these things.

“I wanted to send my daughter to a preschool that would nurture and encourage her curiosity and incorporate Mandarin language,” says Wendy, who is mother to two girls, ages six and three. “My husband and I were unable to find a preschool that fit the bill that didn’t also have a seemingly endless wait list. Instead of giving up on our dream or moving to another city, we decided to do something about it.” With the support and elbow grease of a group of founding parents, Presidio Knolls School opened in February 2008. A month later, our family became part of its community too.

At MHC, Wendy says she learned that it’s “important to take it upon yourself to make a difference, rather than wait passively for change to happen.” Wendy now concentrates on fundraising for the school, which serves two- through five-year-old children, and expanding in a new site this year.

For more information on Presidio Knolls School, go to www.presidioknolls.org.