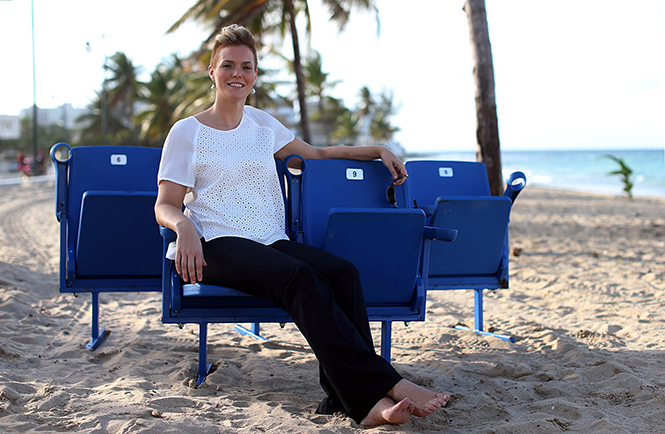 On any given day, you might find Wesley Elizabeth Cullen ’00 checking on HVAC systems, reviewing performer contracts, or overseeing building security for the Coliseo de Puerto Rico, an 18,000-seat arena in San Juan. In her role as general manager—the first female GM of the Coliseo—Cullen is responsible for successfully running the venue’s day-to-day operations.

Confidence, critical thought, and the encouragement to go for what you are passionate about are nurtured at MHC, and you never know where they will take you.

Cullen’s achievements and contributions have earned her much recognition, including being named one of Caribbean Business’s “40 under 40” and a Venues Today Woman of Influence. In 2013 she received the ConPRometidos IdeasXPuertoRico Award for her commitment to solving social and economic challenges in Puerto Rico. In September 2014, at the Coliseo’s tenth anniversary celebration, Cullen was congratulated by the Senate of Puerto Rico for her many accomplishments.During her eight years in Puerto Rico, Cullen has made her mark on the island, both in the Coliseo and in the community. In 2011, she founded Super Positivo, an organization dedicated to installing trash bins and ashtray stations on beaches. She is also involved in initiatives to support women’s leadership development, including serving on the board of the local chapter of Ellevate, a global professional women’s network dedicated to the economic engagement of women worldwide. In an effort to empower women, she gives talks in the community, at companies, and conferences. Cullen notes, “One of my favorite things to share is the Power Pose; assuming the Wonder Woman posture for a minute is a simple, foolproof way to increase your confidence and project your best.” She suggests watching the TED talk “Your body language shapes who you are” by social psychologist Amy Cuddy, who introduced the concept of “power posing.”

“I’m very proud to be a Mount Holyoke woman. I never would have imagined doing what I do, and loving it, with a history degree from MHC. It took me about ten years to appreciate a lot of what I got from being there and the importance of women’s leadership,” says Cullen. “Confidence, critical thought, and the encouragement to go for what you are passionate about are nurtured at MHC, and you never know where they will take you.”

One response to “Wesley Elizabeth Cullen ’00”