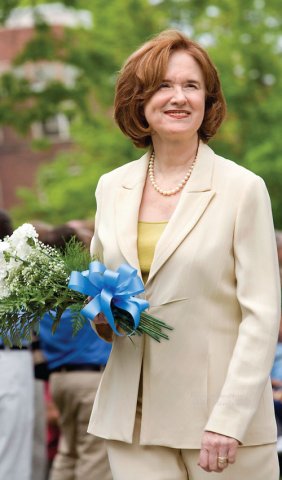 The Quarterly invited alumnae to submit questions for President Joanne V. Creighton to answer. You sent many, and she chose which to answer here. Others will feed into a farewell article planned for the end of Creighton’s presidency next spring.

Q. I was a student on the committee of faculty, staff and students you formed in 1996 to develop the Plan for 2003. We spent a lot of time working on the college mission that year. Knowing what you know now, how would that mission statement be different? Elizabeth O’Donoghue ’97

A. I’m proud that we were able to boil down the College’s mission into a single sentence: it warms my heart as an English professor! The key elements in that sentence—academic excellence, diverse residential community of women, liberal arts, and purposeful engagement in the world—are still the touchstones of Mount Holyoke today. I wouldn’t change a word.

Q. What is the biggest challenge facing the College today and what’s being done about it? Melinda A. Mann ’79

A. Without a doubt, the current economic environment is providing the greatest challenge that colleges and universities have seen, probably since the Great Depression. We’re doing all we can to contain costs, but we know we can’t cut our way back to equilibrium without seriously hurting educational quality. So our challenge over the next few years will be to grow revenue to maintain Mount Holyoke’s academic excellence.

Q. What new requirements are necessary for a successful MHC president, and if you were serving on the interview committee, what are the most important traits and skills you would wish to see? Katherine Gleeson Wallin ’59

A. There are many ways to be an effective college president. Fundamentally, though, to lead Mount Holyoke one must appreciate and privilege the College’s raison d’etre, its academic program and its outstanding faculty. At the same time, the president is the CEO of a complex organization and must do all the things that good managers do: hire well, plan, execute those plans, and balance the budget.

Q. How can a women’s college stay viable in the weak economy, which threatens to push students toward “marketable degrees”? (yuck! The term leaves a bad taste in my mouth!) Dee Drummey Boling ’88

A. The question is really less about being a women’s college, and more about the state of the liberal arts. With families under greater financial pressure, students have every reason to insist that their college education should help them find a job, as well as lead a productive, fulfilling life. The liberal arts have historically been the best route into the professions and to career success. We need to make sure that we keep the curriculum relevant and that we help employers and students recognize its value. This is one of the drivers behind our new Nexus program, which will connect the liberal arts classroom with experiences beyond the gates.

Q. Why do you think we have fallen further in ranking than either Wellesley or Smith? And why have we fallen so far below Wellesley? Anonymous

A. US News rankings reflect institutional wealth more than any other factor, including educational quality. Mount Holyoke will always be disadvantaged compared to wealthier peers. If their methodology looked at real measures of academic strength and educational outcomes, Mount Holyoke’s position would no doubt rise. But such things are not easily quantified, and we must not forget that the real motivation behind these rankings is to sell magazines—I’ve long been a critic of the damage these bogus rankings have done to higher education.

Q. Although I strongly believe in single-sex education, I think it is outdated and archaic, and has significantly altered the quality of applicants and matriculating students at MHC. What does President Creighton think about MHC going co-ed, to maintain its competitive position, and to actually elevate its rankings relative to other small liberal arts colleges? Susan Sokalner Dickstein ’71

A. By any measure, the students at MHC today are every bit as strong as they were a generation ago, and we’ve been receiving more applications over the past few years than at any time in institutional history. Like you, most people in the MHC community are passionate about both academic excellence and women’s education, and I wouldn’t want to compromise on either. We’ve yet to see any data that suggests that co-education would improve Mount Holyoke’s academic quality, or its ranking.

Q. What’s your take on the future of women’s colleges? Did your view change in any way during your tenure at MHC? Carol Sliwa ’80

A. I freely admit that I came to Mount Holyoke with some skepticism about single-sex education, but I will leave a convert. I think there will be a continuing place for women’s colleges in the United States for one simple reason: they work. One of the most inspiring parts of my Mount Holyoke career has been our involvement in Women’s Education Worldwide. While women’s colleges in the United States may be a counter trend, there are young Mary Lyons around the globe starting brand new women’s colleges in our image where they are most needed—places like Kenya, Sudan, Zimbabwe, Saudi Arabia, Dubai, Bahrain, Bangladesh, and Pakistan. And they, too, will change the world for the better.

Q. Of the new buildings, what’s her favorite and why? KC Maurer’84

A. Mary Lyon said, “Stone and brick and mortar speak a language that vibrates in my very soul,” and I have to agree. I love all our new buildings, but the most satisfying for me has been the new residence hall, which is actually the only entirely new structure we’ve built during my presidency. I love the way it communicates with the both the landscape and the architectural heritage of campus. It’s state of the art, but it feels like it has always been there.

Q. My classmates and I have always liked the fact that we were Joanne’s first firsties, and are really happy that she’ll be with the College long enough to celebrate at our 10-year reunion with us! If I were having lunch with President Creighton, I think I’d like to ask her how her impressions of the students have changed over time, and what she’s learned about the kind of women who become Mount Holyoke alumnae. Katherine O’Brien ’00

A. While the faces have changed over the years, there has been a remarkable consistency in student values, ethos, and affect. I have learned a great deal from our students. I am deeply impressed by the incredible journeys so many of them have taken to get to the College—from inhospitable settings such as a refugee camp in Algeria, or a village in Tibet, or a township in Zimbabwe—and the passion for learning and for making a positive difference in the world that so deeply infuses their lives.

This article appeared in the summer 2009 issue of the Alumnae Quarterly.

3 responses to “You Asked; She Answers—President Creighton Addresses Alums’ Questions”