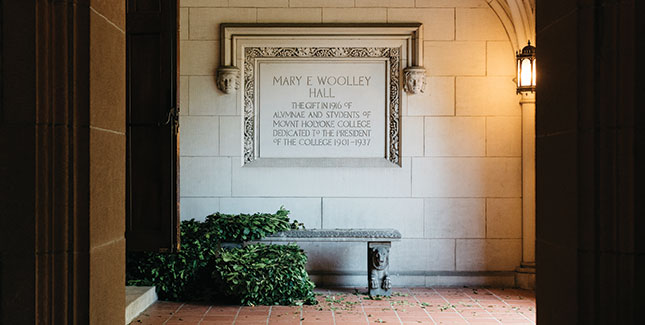 The 2017 laurel was delivered the day before the parade and assembled early the morning of. Photo by Deirdre Haber Malfatto

A familiar and beloved ceremony to all who belong to the Mount Holyoke community, the ritual of the laurel parade began 117 years ago, with two wreaths of laurel leaves carried by the president and vice president of the graduating class. In 1902 the wreath was lengthened into “a beautiful garland of mountain laurel made by freshmen,” according to the Springfield Union News & Sunday Republican, which regularly reported on the event. For a time forget-me-nots and lilies of the valley also held a place in the ceremony.

The ceremony draws its symbolism from ancient times. The bay laurel that once sat upon the heads of Roman poets evolved into mountain laurel draped across students’ shoulders, symbolizing honor, achievement, and glory. Traditionally, laurel branches are fashioned into twenty-yard ropes about six inches thick, then attached together to form one long 275-foot chain that is carried by seniors who walk in the parade, four across. 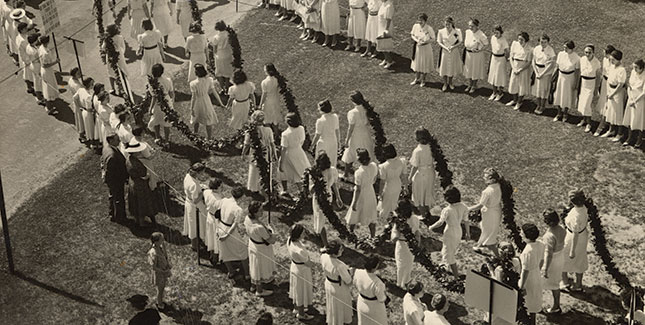 The tradition has been interrupted several times, with laurel replaced during times of scarcity. In 1923, in view of mass destruction of laurel in Massachusetts, the graduating class voted to replace the laurel chain with daisies in order to preserve the evergreen. In the following year, even the daisy became scarce, so seniors carried “only long streams of blue and white ribbon” along with “two huge bouquets of roses,” reported the Springfield Sunday Republican. Decades later, in 1970, students voted to carry signs protesting the Vietnam war instead of the laurel chain.

Today, more than a century after its debut, the parade continues, with laurel as its centerpiece. On the day before graduation, members of the senior class prepare to take their place in the parade, lining up in front of Mary E. Woolley Hall to be draped with laurel. Participants dress in white, as they have from the beginning, to honor suffragists who wore white as they fought for the right to vote. As they walk through campus to cheers from friends, family, and members of the Mount Holyoke community, they are enthusiastically welcomed by the alumnae who have returned to campus to celebrate their own reunions. 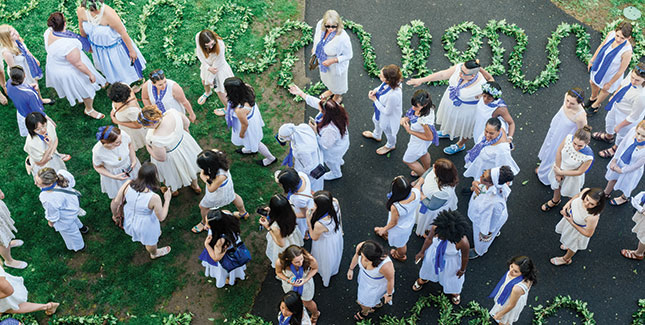 The class of 2016 gathers before the parade lineup. Photo by Deirdre Haber Malfatto

The parade proceeds to Mary Lyon’s grave site, where seniors gather close and pass the laurel chain overhead, draping it on the iron fence. The ceremony concludes as students and alumnae join together in singing “Bread and Roses” to remember those who fought for reasonable work hours and equal pay during the Lawrence, Massachusetts, textile mill workers strike of 1912. And through this tribute to women’s achievements in history the next generation of alumnae are launched, inspired to achieve.

This article appeared as “A History in Laurel” in the summer 2017 issue of the Alumnae Quarterly.