Over two May weekends of sunshine and rain clouds, more than 1,700 alumnae and guests from the classes ending in twos and sevens, and 2015, traveled back to Mount Holyoke from across the globe to reconnect with each other and the idyllic campus they still call home. From thought-provoking Back-to-Class sessions with current MHC faculty and staff, to outlandish parade costumes, to catching up with beloved friends, Reunion was filled with celebrations, big and small. Here’s a brief glimpse of some of the stories that alumnae shared with us during their time on campus in non-chronological order. 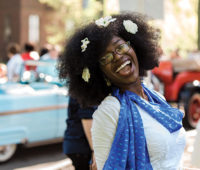 “Oh we come back a lot. We like to just walk around the campus. It’s so pretty.” Katherine Butler Jones ’57, who lives in Newton, Massachusetts, with her husband, cofounded the Roxbury Newton Freedom School, founded the Metropolitan Council for Educational Opportunity Program, and was the first African American to be elected to the Newton School Committee. Katherine also won awards for her historical writing about her family, specifically her great-grandfather, Edward Weeks, who brought slaves to Canada through an Underground Railroad station in the Adirondack Mountains.

“I’m halfway there!” says an expecting Mariah Cushing Toulouse ’07 at the Picnic on the Green, which included activities such as face (or
belly!) painting, balloon animals, a DJ, and a celebration tent for the 100th anniversary of the Alumnae Quarterly.

“I was a champion table tennis player.” Ruth Wilson Millington ’42 was in fact the Pennsylvania state champion and was ranked third by the USA Table Tennis Association by the age of sixteen. Ruth was one of three alumnae attending the class of 1942’s seventy-fifth reunion. 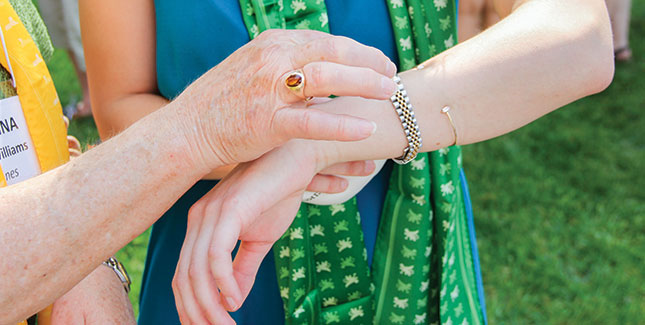 “The watch is probably thirty years old, and I wore it proudly for at least twenty, but then the gold on gold made it hard for me to tell the time accurately so I replaced it with an identical watch with a white face. I didn’t know what to do with it until the idea of passing it on to our sister class (2017) occurred to me.” Sue Ellen Utley ’67 talks about her idea to hand down her Mount Holyoke watch. “I’m so happy to be giving it to Juliet Martone ’17, who has been a leader in our class connections. Watches are coming back in business, because you can check the time in meetings without looking at your phone. Traditions last a long time at Mount Holyoke. This is a new one, but maybe it will last fifty years.”

“We were both at our last reunion just sort of chatting—we hadn’t known each other in college—and she mentioned her son went to school near Connecticut College, and I said, ‘Oh that’s funny, so does mine.’ Well it turned out our sons, Noah and Ethan, had become best friends through playing online video games together. So now we’re good friends.” Mary Scheimann ’82 (left) laughs about the beginning of her friendship with Andrea Rossi-Reder ’82. “Come get in this picture so we can send it to them and embarrass them,” she said to Andrea before having their photo taken at the Alumnae Quarterly 100th anniversary booth.

“I read once that life is a process of individualization. Babies and young people all kind of look alike, but as we age we become distinct individuals with our own sets of experiences and with faces that are less typical, more unique. Seeing us—fifty years later—gave me the impression of seeing so many life stories right there before my eyes.” Ellen Ammerman Gouin ’67 joined Reunion I from Normandy, France, via Skype, and reminisced with a group of ten classmates who lived together during their sophomore year in Le Foyer—on Morgan Street, across the street from Abbey-Buckland—when it was the French House. Their house mother, Mademoiselle Gaele Guezennec Fitch, who was a young French master’s student at the time, traveled from her current home in England to join the group on campus. 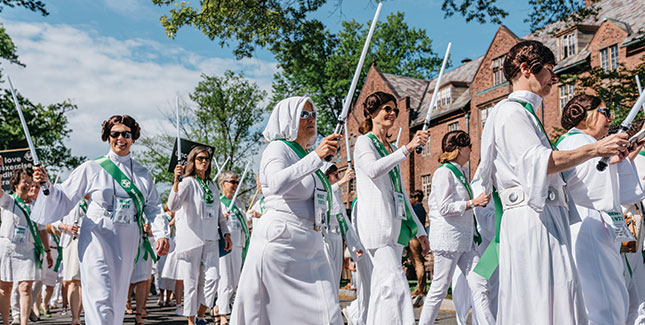 The class of 1977 marching in the laurel parade. Photo by Deirdre Haber Malfatto

“I did some research on Google to see what events occurred in 1977 and noticed that the first Star Wars movie was released that year. I remembered back to how I felt when that first movie took the world by storm just after we had graduated. (And we intended to do the same, of course!) It was so innovative and fresh! And I thought about how—just like our class is still evolving and growing—new Star Wars
movies are still being created even forty years later.” Reunion Cochair Judy Flynn ’77 talks about how she came up with the idea for the Princess Leia parade costumes for the class of 1977.

“It’s vicious . . . but it has lovely orange roots.” Inez Chase Zimmerman ’52 contributed to the discussion about Oriental bittersweet, an invasive species that Professor Kate Ballantine’s restoration ecology students are working to get rid of in the stream that connects to Upper Lake. Professor Ballantine took alumnae on a tour of the campus field station during Back to Class on both reunion weekends. Before beginning work to restore the stream, which students aptly named “Project Stream,” Upper Lake was becoming more and more polluted due to runoff from the nearby golf course. “Part of our class involves community education and outreach. Just last week we had one hundred students from Springfield here. And we’ve also had a farmers’ market booth, where we hand out flyers and talk to community members,” says Ballantine.

“My grandma is so excited to ride in the old cars. She’s been talking about it all year.” Hannah Galloway ’17 poses with her grandmother, Janet Eddy Ordway ’47, before they both join in the laurel parade. Janet was a zoology major at Mount Holyoke and later one of only two women in her class at Columbia University’s medical school. She went on to become a psychiatrist at a time when few women were physicians. “My grandma is the reason I was able to go to Mount Holyoke. When I was applying to colleges, we thought of Mount Holyoke, and it just clicked,” says Hannah, who majored in psychology, with a minor in biology and a Five College Certificate in cognitive neuroscience. 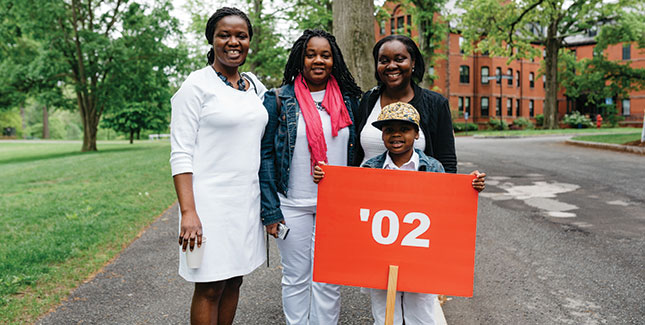 “We were here together, and we come back together!” Sisters Nike Oyeyemi ’02 (right) and Yinka Oyeyemi ’00 (left) both live in New York City and get double the reunion fun. They returned to campus with Nike’s son, Devin Henderson, and their other sister, Shola Oyeyemi. “I fell in love with the campus when moving in Yinka on her first day of college. I loved the idea of a college whose sole mission was to educate and empower women to be leaders in all fields. I was also attracted to the fact that I could double major in philosophy and history—my two favorite subjects!” says Nike.

“I love rediscovering my classmates. We come back with new kids, new spouses, new careers,
new ideas!” During Reunion Carrie Field ’97 (center) was presented with the Medal of Honor, which recognizes service to the College or the Alumnae Association. Not only has she served on the Association Board of Directors and the College Board of Trustees, but she’s volunteered on her class board and is the president of the Mount Holyoke Club of Hartford.

“Society advanced a century from our freshman to senior year, which was 1968 to 1972. I remember a classmate got married and was given permission to live off campus with her husband. Our house mother took her aside and said to her, ‘I hope you don’t share the secrets of married life,’ with the rest of the girls. But by 1971 or ’72 we were all like, ‘Who cares!’” Marilyn Schapiro ’72 traded stories with classmates and alumnae from the class of 2012 in the Archives during Back to Class. 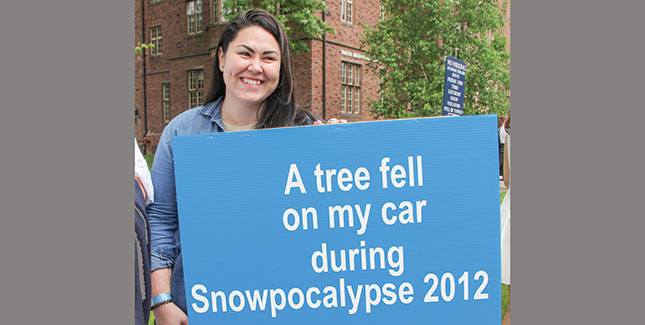 “We got pretty rowdy!” Ellie Epstein ’12 remembers the snowstorm that knocked out power on campus for three days and damaged her car during October of 2011. “They had to bus in kids from Hampshire to eat at Blanchard, because their dining hall didn’t have generators. It was weird.” Ellie says a classmate submitted the parade sign on her behalf. “I had no idea this sign was being made for me,” she laughs.

“Just as the elevator door was about to close, it opened and gave us the surprise of a lifetime.” Christine Parker Stuart ’92 describes the moment that she discovered that her mother, Ilse Acosta Parker ’69, had made the trip to Reunion to surprise her and her daughter and niece, who had traveled with Christine to see Mount Holyoke. “After telling me she wasn’t going to make the trip, she decided she absolutely couldn’t miss her two granddaughters seeing Mount Holyoke for the first time. My mom looked at least ten years younger—I could see in her eyes the young, adventurous woman who traveled from Costa Rica to South Hadley [fifty years ago].” 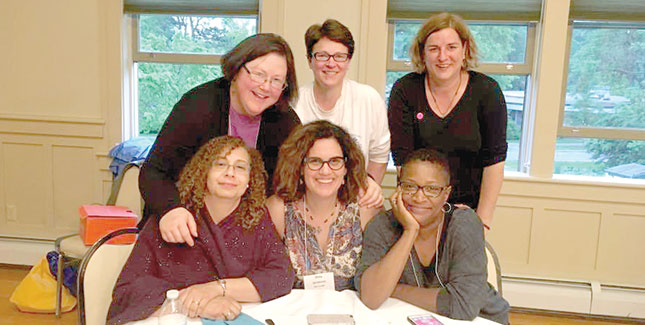 “As a student I had more friends in other classes,” says Gretchen Schmelzer ’87 (top right), “so I go to Reunion not to see friends, necessarily, but to make new ones.” At the class dinner, Gretchen sat down at a table with one person she knew, and three she didn’t. “It made me long for the dinners around the round tables in MacGregor. It was a conversation of hope, possibility, and purpose,” she says, “and I left dinner with the electric feeling that I had left graduation with—after our charge from Maya Angelou—to use our gifts and our privilege to change the lives of others.”

This article appeared as “Reunion 2017: In Stories” in the summer 2017 issue of the Alumnae Quarterly.