19th Century “Prayer for Mount Holyoke” Rediscovered in the Archives 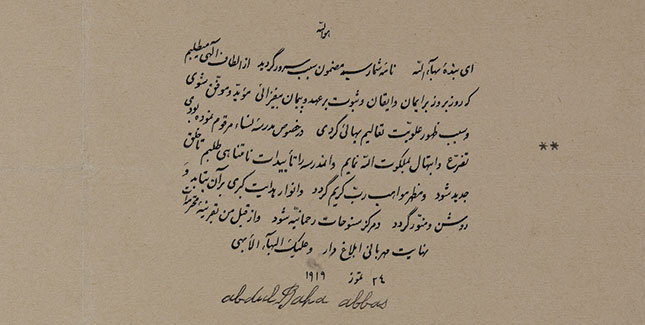 Translation: “I supplicate and entreat to the Kingdom of God and beg for that school limitless confirmations, so that it may be born anew, may become the manifestation of the bounties of the Generous Lord, the lights of Supreme Guidance may shine upon it and may illumine it, and may become the center of merciful susceptibilities.” Courtesy of Archives and Special Collections

In 1919 Charlotte D’Evelyn, a new member of the Mount Holyoke English faculty, received a “Prayer for Mount Holyoke,” written by Abdu’l-Baha, who was then the head of the Baha’í faith after the death of the founder of the faith, Bahá’u’lláh. This significant document was recently rediscovered in Archives and Special Collections and conserved at the Northeast Document Conservation Center.

The Bahá’í faith was established during the middle of the nineteenth century, according to Baháiteachings.org, when Bahá’u’lláh began openly teaching the faith, with its “revolutionary messages of human unity, the oneness of all Faiths, the equality of men and women, and the agreement of science and religion, and the establishment of a global system of governance.” Today the Baha’í faith is the world’s newest independent global belief system and the second-most widespread religion after Christianity.

In April Professor of History and African American Studies Holly Hanson and other members of Mount Holyoke’s Baha’í community gathered to celebrate the history of this prayer and the installation of a facsimile version at Abbey Interfaith Sanctuary. After the ceremony, the original document was returned to Archives’ stacks to enjoy a long life with temperature and humidity controls.

This article appeared as “Uniting a Community”  in the summer 2017 issue of the Alumnae Quarterly.