Sphinx Statuette with Hidden Message Passed Down through Classes 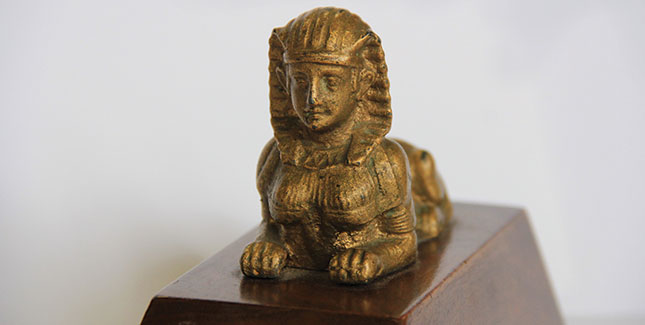 A shoe-sized bronze statuette of a sphinx sits in the Mount Holyoke Archives and Special Collections protected by thick layers of wrapping paper. The rust stains on the bronze and dusty edges reveal a trace of age. To discover the original use of the mysterious object, one only needs to seek answers from beneath. The underside of the walnut base reveals a hidden compartment, and inside it a suede-felt booklet titled “The Sphinx Classes” (photo below and on Instagram).

The ancient guardian of Egyptian temples has long served as a proud mascot of the sphinx classes of Mount Holyoke students. Beginning in 1919 the statuette was passed on from sphinx seniors to the incoming golden first-years. Along with the sculpture, the graduating class would also write to their “daughters” a message of wisdom, encouragement, and kindness. In 1939, when the class of 1935 passed on the statuette, they included a note, written in capital letters: “You inherit an emblem which offers challenge: challenge to create a work which will stand as timelessly as does our sphinx—challenge to seek and respect her.” 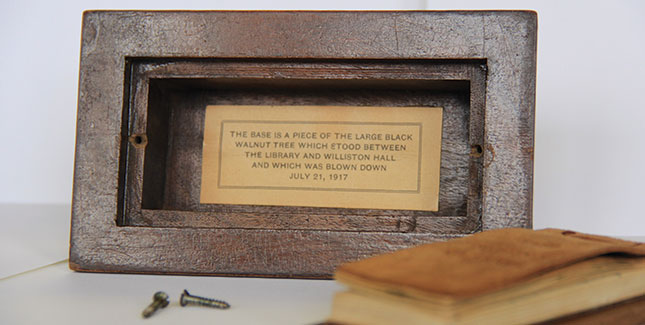 The tradition continued for more than forty years, with the last message in the booklet from the class of 1959 that reads, in part, “This emblem of steadfast strength and ageless wisdom carries to you the untellable secrets of the classes to which you are bound by the symbol of the sphinx.”

It is unknown why the tradition came to an end. The statuette is now housed in Archives, where any visitor can seek the wisdom of past alumnae housed secretly in a golden sphinx.

This article appeared as “The Wise Silence of the Sphinx” in the summer 2017 issue of the Alumnae Quarterly.