Then and Now: Senior Ball 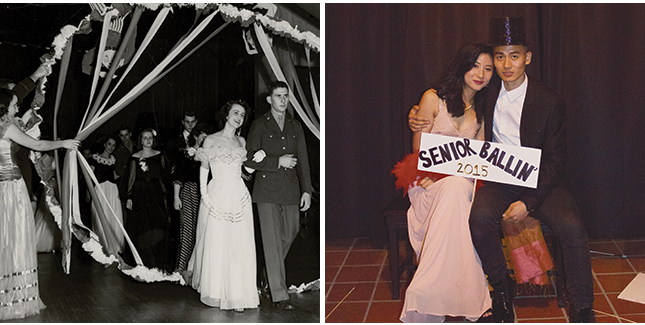 Senior Ball: a time for students to celebrate their college experience by “puttin’ on the ritz.” On the evening of February 23, 1940, “the ritz” happened to be “a laurel wreath for graceful gaiety” worn proudly by the seniors, as described in the class of 1940 yearbook.

The dance was carnival themed, complete with an enormous hoop of red, yellow, and blue streamers suspended from the ceiling. Handmade animal cutouts adorned the balconies, and fanciful lights illuminated paper circus horses. Chapin was transformed into a merry-go-round.

Sophomore Bessie Nesbit ’42 wrote home to her parents the following day, saying, “I went down to S.A.H. [Student Alumnae Hall, now known as Mary Woolley Hall] & watched the Senior Dance till 10:45. It was lots of fun to watch. The girls’ dresses were very pretty & so many of the boys had tails.”

Mount Holyoke seniors wore full-skirted dresses and moved to the jaunty sounds of the evening. Musical selections included Jack Teagarden, the “Father of the Jazz Trombone.” It was the year of swing, with Glenn Miller’s  “In the Mood” topping the charts at number one.

As summarized in the class of 1940 yearbook, “That intangible essence was ours that night. We have had it, we pass it on to ’41.

Over the years, Senior Ball has changed forms to reflect the culture of the time—or for the class of 2015, the culture’s interpretation of a different time. This year, the Senior Ball theme was “Some Like It Hot.”

On Saturday, April 25, students, dressed primarily in black and red, made their way to Chapin Auditorium, braving the chilly spring evening. Chapin celebrated a Roaring Twenties flair with a sparkling cider fountain, white-feather centerpieces, and black, gold, and silver party beads for all.

Only seniors are allowed to buy tickets, but many invited a friend from a younger class year, including more students in the fun.

Class vice president Rachel Smith ’15 commented on the feel of the evening: “Being a senior is no small accomplishment, and it was wonderful to see the people we had spent the past four years with celebrating our successes together. There ws definitely a magical element to the whole event.” 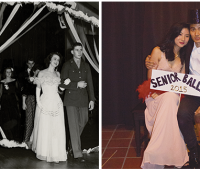