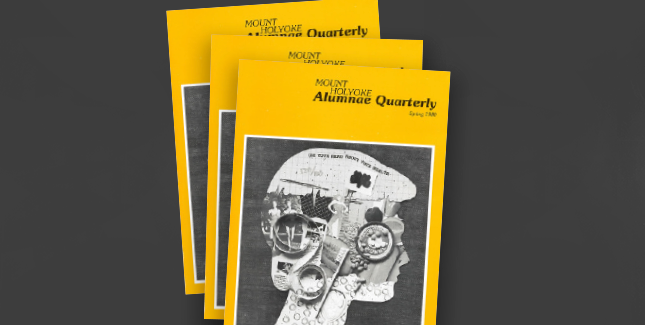 ¶
The spring 1980 issue of the Alumnae Quarterly was solely dedicated to the education and promotion of women’s health. Topics discussed included nutrition, contraception options, menopause, genetics, plastic surgery, and more. Alumnae ranging from the class years of 1929 to 1976 contributed by writing and submitting articles to the Quarterly. The issue opened with the following lengthy letter from the editor:

Is this issue of the Quarterly for you? Are you likely to turn to your alumnae magazine when looking for answers to questions regarding your health? Not ordinarily. In planning for this special issue, however, the Quarterly committee and the editors concluded that you would like to know what some of our professionally trained alumnae and faculty members have to say on medical matters about which we read a great deal in today’s press. An announcement inviting participation was placed in the summer 1979 Quarterly. The response, which was enormous, led to a selection process in which we became well aware that many specialized areas and professional opinions could not be included. In most instances we limited our selection of subjects to be covered to those offered by people from whom we had had responses. Perhaps other points of view will be expressed in forthcoming “Speaking Up” pages.

Are you likely to turn to your alumnae magazine when looking for answers to questions regarding your health?

This issue gives us the opportunity to pay tribute not only to Mount Holyoke’s long-standing and distinguished reputation in the teaching of the sciences but also to two alumnae who become world-renowned for their contributions to medicine: Virginia Apgar ’29 MD and Rachel Brown ’20 PhD. Virginia Apgar, obstetrical anesthesiologist, developed the criteria, which became known as the Apgar Score, for determining within sixty seconds the health of a newly born baby. Rachel Brown, public health biochemist, was the co-discoverer of Nystatin, the first antifungal antibiotic to be administered safely to humans. The reputations of both of these women are carried on at Mount Holyoke by scholarship funds which bear their names and to which additional contributions may be made in care of the development office at the College. The Virginia Apgar Fund supports a named undergraduate premedical scholar. The Rachel Brown Fund, established by the Research Corporation, provides undergraduate scholarships and graduate fellowships to biological science students. We hope that this issue of theQuarterly helps to point out the College’s ongoing distinction in the sciences and to direct all of us to more enlightened care of ourselves and to more intelligent use of available health care facilities.