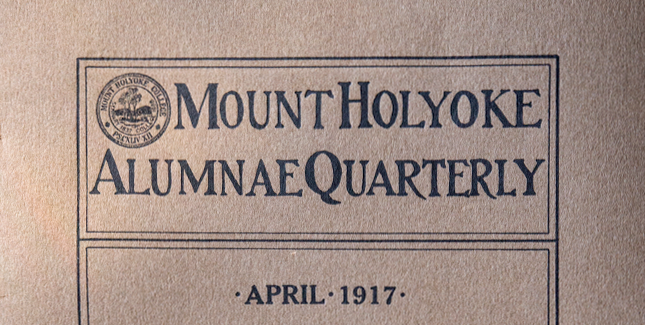 ¶
On page thirty-two of the debut issue of the Alumnae Quarterly, editor Margaret Ball, class of 1900, and her editorial advisory board lay out their intentions for the magazine in a column titled Comment and Discussion, transcribed in full here:

This Quarterly makes its first appearance at a moment when every institution in the country must question its own reason for existence, must determine that it will contribute something of positive value to the life of the nation of will discontinue its own efforts in favor of some more essential activity. In an unpretentious fashion of our own we hope to meet this challenge of the times. Whatever else the country loses in time of war it must keep the habit of believing in education; it must strengthen the intelligence of our education schemes; it must learn to make the most of the years given to the training of our young people and through them to the forming of a national mind. Every college must do its best to strengthen and fulfill its own high purpose. In this effort former students must help the students of the present moment, and both must help and be helped by the faculty and officers of the college. In initiating the Mount Holyoke Alumnae Quarterly the graduates of Mount Holyoke believe that they are assisting to coordinate and reinforce the varied efforts that are constantly being devoted to the cause of this college, and through this college to the cause of the higher education in America.

The editors hope that this department of Comment and Discussions may quickly be taken over by the readers of the Quarterly, so that it may become a real forum so far as the printed page will allow, a department of open letters presenting alumnae opinion on all matters of consequence to the alumnae and the college. Letters should be sent to

the editor by the end of the first week of the month preceding publication. We hope ultimately to have the spring number appear on the first of April; the summer and fall numbers as nearly on the first of July and October as our desire to publish news of commencement and the opening of college will permit, and the winter number at New Year’s time.

We want alumnae news, no less than alumnae opinion. In taking over the Alumnae Notes from the Mount Holyoke (which will continue to print only the news from recent classes), we shall lose something of timeliness because a quarterly is even slower in appearing than a monthly. But we hope to make up for this by devoting more space to items which give something better than an external view of alumnae history. We want records of experience, of service, of enterprise. A new address is important, and such information is ardently desired by the Alumnae Secretary for use in the Address Book as well as in the Quarterly lists. But even more interesting is a new occupation, or a new opportunity developed in the accustomed environment. We all want to know how other Mount Holyoke women are “cultivating their gardens,” whatever those gardens may be. 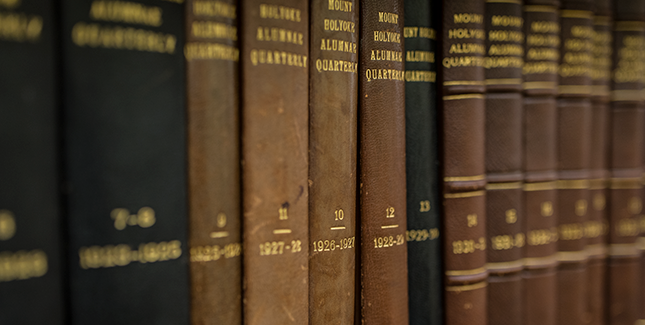 Bound issues of the Alumnae Quarterly. Photo by James Gehrt

Items should be sent to Miss Crowell as promptly as possible. We cannot be sure of including them in the current number unless they arrive a month before the date of publication. We beg to have them written on one side of the paper only, in extremely legible form because of the errors that are likely to creep into the transcripts of names and to annoy everyone concerned. Accurate records, of matters that are interesting enough to retain their flavor until the next Quarterly appears,—these we want; and we can have them only if the class secretaries and the individual alumnae are willing to send us the news.

If anything in the appearance of this periodical should seem to hint that the editors expect to make it sensational, let us quickly disclaim such an intention. Because of war conditions we are looking yellow. We believe, however, that the color is only skin-deep. The real excitement of this magazine is undoubtedly to be found in the advertising pages, and even there we make a point of aiming at the substantial rather than the sensational. But a quality of paper already in stock enables the printer to give us a better price than we could have on paper bought now, and we cannot afford for the present to choose our complexion according to our own taste. The shape and size of the magazine are determined in part by the same situation. But we have been able to adopt designs for cover and page made for us by Miss Gertrude Hyde of the Art Department, and so we congratulate ourselves that we are not wholly at the mercy of the present crisis, even in external matters.