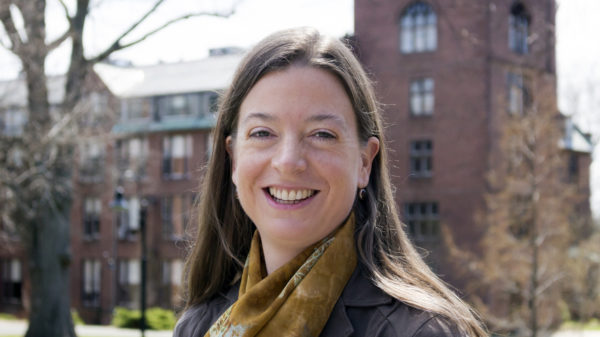 Liz Lierman has been named interim executive director of the Alumnae Association. Lierman, who has served as executive director of the Career Development Center since 2014, transitioned to her new role on July 1 and will serve during fiscal year 2021 in a creative partnership between the Alumnae Association and the College. She succeeds Nancy Bellows Perez ’76, who announced her retirement in February after more than four years in the position.

“When the pandemic hit, we were just beginning a search to fill the vacancy, and we needed to pivot quickly, given the circumstances,” said Alumnae Association President Maria Mossaides ’73, P’04. “I’m excited that Liz is on board. She is an experienced leader who brings to the role knowledge of our alums and strong relationships with the Association staff and other partners across campus. The Alumnae Association is in great hands with Liz at the helm.”

Lierman graduated from Williams College with a degree in psychology. She holds masters degrees in social work and nonprofit management from Case Western Reserve University. Prior to joining Mount Holyoke in 2014 she worked at Bard College of Simon’s Rock and Oberlin College. In the past six years, Lierman has transformed the Career Development Center, focusing on improving the student experience and building strong relationships with external partners. Lierman has also been a strong partner in support of The Gates, a new platform — to be debuted later this summer — that will enhance connections for alumnae and students in support of career-related opportunities.

“Since joining Mount Holyoke, I have been consistently inspired by Mount Holyoke alums, and impressed by their commitment to supporting the success of students and of one another,” said Lierman in July. “In many ways, the partnerships with alums make it possible for the College and its students and graduates to create meaningful change in the world. I am excited about the opportunity to lead the Alumnae Association and work closely with the alum community this year, and to also be of service to the Career Development Center during this pivotal time.”

During the next year, Lierman’s focus will be to guide the Alumnae Association in its mission to provide diverse programs, expertise and resources that foster lifelong learning and to empower alums to connect with each other and with the College.

“I’m delighted that we were able to take a collaborative approach to filling this important position at the Alumnae Association,” said President Sonya Stephens. “There is a synergy in the work of the Alumnae Association and the Career Development Center, and Liz brings to this role not only her vision, imagination and proven leadership, but also deep commitment to Mount Holyoke’s graduates and genuine excitement to serve their interests in an expanded way.”

The search for the executive director will be announced at a future date.