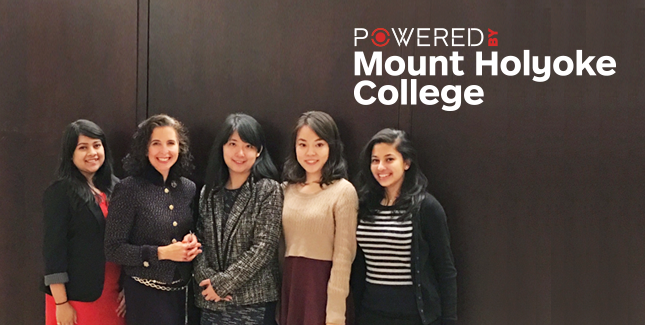 Throughout the last five years, Cheryl Obedin Rivkin ’90, chief administrative officer and director of compliance at investment firm Muzinich & Co., has hired a Mount Holyoke alumna. Each of them came to Rivkin through either the Alumnae Association’s Career Directory, LinkedIn, or through a personal connection. Three of them started as undergraduate summer interns, impressing Rivkin and others at the company so much that full-time offers were made before graduation. And it all happened with a serendipitous start.

During Rivkin’s early years at Muzinich, a privately-owned firm that specializes in public and private corporate credit, the company, which was considerably smaller in terms of staff than it is now, often only hired very experienced professionals. “We didn’t have the bandwidth to train and nurture new people in the business,” says Rivkin. In 2011, a colleague of Rivkin’s suggested they hire an intern to help with an increasing workload.

“It was almost as if our conversation was overheard,” says Rivkin. She turned to her computer and in her inbox was an email from Reme Rashid ’12, an economics major seeking advice on how to pursue a career in finance. Rashid had reached out to Rivkin through the Career Directory, a resource made available to current students.

Upon reading her email, Rivkin asked Rashid to send her resume, ultimately inviting her to the office in New York, with Rashid landing a summer internship. Impressed with the work that Rashid was doing, Rivkin invited her to work part time for the firm remotely during her senior year. At the end of that year, Rashid was offered a full-time job as the firm’s risk analyst.

Over the next four years, Rudmila Salek ’14, Panyun (Jane) Chen ’16, and Weiding (Carol) Wu ’17 embarked on similar paths, making connections with Rivkin through Rashid, the Career Directory, and LinkedIn, respectively. For Salek, who was already in her senior year, a job offer was made after a handful of interviews (one of which was conducted while in line for commencement rehearsal). For Chen and Wu, their impressive work as summer interns led to part-time jobs as seniors and full-time offers upon graduation.

While each majored in economics, Rivkin feels strongly that hiring these four women has helped showcase the power of a Mount Holyoke liberal arts education. “We work in finance, so math classes are very helpful,” says Rivkin.

“For each of these women, this is clearly not their only skill, and that would not be sufficient in the kind of jobs they have. When you talk about whether a liberal arts education has prepared you for the real world, I think all of these women prove that it did.”

In fact, having five Mount Holyoke women working at the same investment firm has impressed a lot of their colleagues. “I had a very senior member of the firm tell me his daughter was attending another school,” says Rivkin. “While she is happy there, he feels that Mount Holyoke would have been so much better. He gets to work with these Mount Holyoke women every day and sees the benefit.”

And by having resources like the Career Directory and LinkedIn made available to them, students are now more prepared than ever to start career networking before graduation. “The directory changed my life completely,” says Rashid. “This whole experience has turned out to be more than I ever expected.”

Adds Wu, the firm’s newest associate, “LinkedIn was very helpful because I could direct the search strictly by Mount Holyoke alumnae and alumnae in finance. When I initially came to visit, [Rashid, Salek, and Chen] were so welcoming and gave me a great overview of the firm. I feel very fortunate.”

Rivkin is proud to know that she has played such a pivotal role in helping shape the early careers of four young alumnae and can’t help but think what this all means for their collective futures.

“It’s been a great experience,” says Rivkin. “I have a really strong feeling that the five of us will know each other for the rest of our lives.”