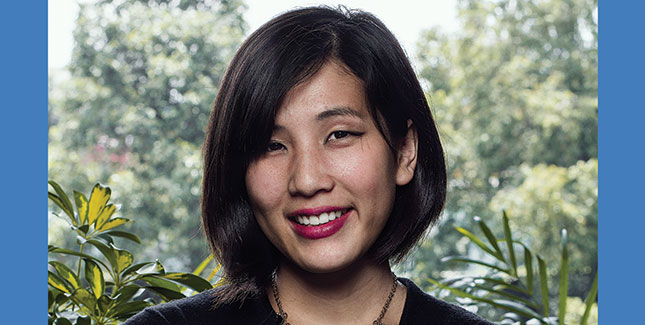 “As a first-generation Japanese immigrant to the United States, I have personal experiences that I’d like to write about to contribute to the tapestry of migrant stories,” says Megumi Yoshida ’09, a 2017 recipient of a Frances Mary Hazen Fellowship from the Alumnae Association. Yoshida used the funds she received to attend the Yale Summer Writers’ Conference this year.

Yoshida studied anthropology and film studies while at Mount Holyoke. After graduation, she became involved with an organization focused on improving human rights in the Philippines. Through her work she realized how her own personal story intersected with forms of privilege in the US and beyond, a theme she became eager to explore. Following that experience, Yoshida moved to Mexico City, immersing herself in the local culture and working with the International League of Peoples’ Struggle as an ally for human rights in Mexico.

My participation in international solidarity informs my journey as a writer. Megumi Yoshida ’09

With her educational background and her interest in diverse ethnic viewpoints and experiences, Yoshida’s next step was to work on enhancing her skills in screenwriting so that she could tell personal stories that raise consciousness around multicultural and social justice issues through, she says, the most “entertaining and impactful way possible.”

“I believe it is the storyteller’s job to overwhelm the narrative with diverse perspectives so there is no longer room for the myth of white supremacy,” she says. Exploring through storytelling and filmmaking how the political influences the personal, Yoshida hopes to broaden her audience’s understanding of human rights issues and effect cultural change.

“My participation in international solidarity informs my journey as a writer,” she says. “And I believe my content will be stronger and richer for having awareness of the complexity of human rights issues on a global level.”

Yoshida’s Hazen Fellowship award covered her travel, tuition, room and board, plus the application fee for the program.

Thanks to generous gifts from alumnae, the Alumnae Association is pleased to provide a number of fellowships to support research, travel, and study.

This article appeared in the fall 2017 issue of the Alumnae Quarterly.

2 responses to “Alumnae Fellowships Fund the Furthering of International Perspectives”