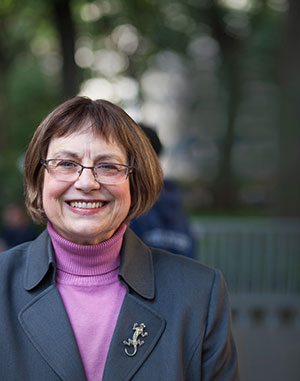 “When I speak to younger people about careers,” says new Alumnae Association President Marcia Brumit Kropf ’67, “I always bring up the fact that you don’t even know what jobs are going to exist in ten years.”

A lifetime educator whose own career has included jobs as classroom teacher, reading specialist, video-game designer, curriculum developer, researcher, and non-profit executive, Kropf brings to her post not only her professional experience but a curiosity and the eager intent to listen to what her fellow alumnae have to say. A French major at Mount Holyoke, Kropf didn’t anticipate that her career path would take so many turns, but when she became chief operating officer of Girls Inc., she says, her every job choice “suddenly all made sense.” Whether working directly with children in the classroom, as vice president of research and information services at Catalyst, or as COO, Kropf, who holds a doctorate in educational communications and technology, realized the steady thread of her career had always been about advancing opportunities for women and girls.

Before assuming her new role, Kropf met with staff at the Alumnae Association and Mount Holyoke as well as College trustees and members of the Association Board of Directors, taking part in, she says, a “fabulous onboarding program” designed by outgoing president Cynthia Reed ’80 and Association Executive Director Jane Zachary.

A former member of the Alumnae Association’s External Achievement Awards Committee and the committee’s outgoing chair, Kropf says the timing of her new appointment couldn’t have been better. Semi-retired, she has more time now to devote to new responsibilities. As she takes the helm, one of her primary objectives is promotion and support of The Lynk, the College’s career network program. “The Lynk is an incredible opportunity for alumnae, students, and the College,” she says. “It’s a perfect initiative.”