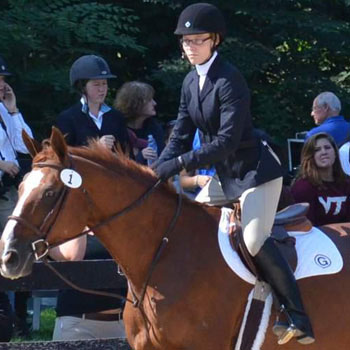 On April 29 the Laurie Priest Alumnae Scholar Athlete Award was presented to Eleanor (Nell) Maynard ’14 at the Department of Athletics annual awards celebration in Chapin Auditorium. The award is given to an exceptional student athlete who displays exemplary leadership, character, and scholarship.

Riding since she was six years old, Maynard’s skill on horseback played an instrumental role in the Mount Holyoke equestrian team’s success over the last four years. Among her many achievements, Maynard placed eighth in Individual Intermediate Equitation Over Fences at the Intercollegiate Horse Show Association National Championships in Harrisburg, Pennsylvania, in May.

A biochemistry major, Maynard has received a number of academic awards, including the Sarah Williston Scholar for academic achievement, and, most recently, the American Chemical Society, Connecticut Valley Section Student Award. During her junior year she volunteered at a medical clinic and private school for girls in Guaimaca, Honduras, with the Diocese of Fall River, Massachusetts.

Maynard’s post-graduation plans include working as a medical scribe at Berkshire Medical Center in Pittsfield, Massachusetts, and applying to medical school, which she hopes to attend in fall 2015.

“MHC enabled me to excel in my sport by providing unbelievable training and beautiful facilities,” she says. “To get to leave class and go have a lesson before lab is a complete treasure, and one that I will miss.”