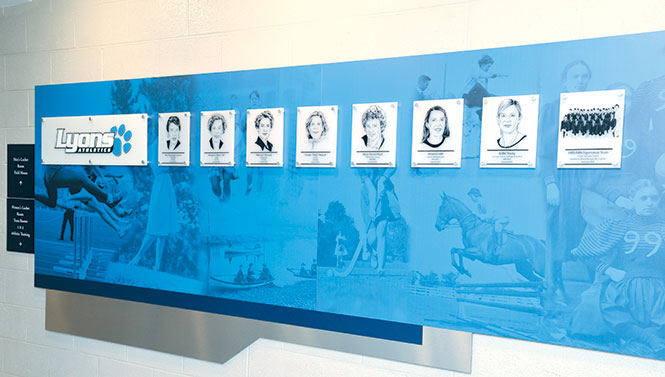 Six former student-athletes, a former athletics administrator, and one team were inducted into the Mount Holyoke Athletics Hall of Fame during Family and Friends Weekend in October. Each inductee’s photograph is now mounted in the new Hall of Fame, located in the hallway leading to the women’s locker room of Kendall Sports and Dance Complex.

From competing (and medaling) in the Olympic Games to aiding in the funding and development of campus facilities, the span of the inaugural inductees’ personal and professional achievements is impressive. The installation of the Hall of Fame reflects the long history of athletic commitment and achievement at Mount Holyoke College. Mary Lyon, a strong proponent of exercise, required students to walk a mile every day after breakfast. “At times when women were discouraged from physical activity, MHC was reshaping the landscape of opportunity and encouraging students to redefine the boundaries of their physical limits,” says director of athletics Lori Hendricks ’92. Going forward, new athletes will be inducted every other year in an effort to honor and recognize the College’s rich athletic legacy. Learn more at alumnae.mtholyoke.edu/hall-of-fame.