The Gospel of “Spirituals & the Blues” 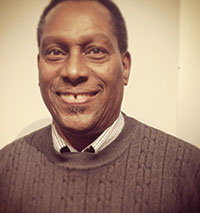 In 1982, five years after joining the faculty at Mount Holyoke, religion professor John Grayson debuted Spirituals, a course that would later become Spirituals & the Blues and his most popular class. Over the next thirty-one years, Grayson taught the course sixteen times, reaching nearly 1,000 students during his tenure.

Designed to offer students an alternative to mainstream philosophy courses, Spirituals & the Blues examined and analyzed African American music as a primary textual source for understanding philosophical and religious language within that community. The curriculum excluded texts written by white Westerners. “That literature is for the elite. I understood this,” says Grayson, who led his students to analyze slave spirituals as documents containing historical knowledge and philosophical ideas while considering a central contradiction in American life: what it means to be free. Religion majors and non-majors alike explored existentialism through the song “Sometimes I Feel Like a Motherless Child.” And classes interpreted the spiritual “Wade in the Water” both as a religious song and a word-of-mouth directive to fugitive slaves.

In oral documents there’s a richness likely to be lost because of the [Academy’s] dependence on written text.”
Professor John Grayson

From the beginning, Grayson prohibited his students from taking notes, instilling a respect for the oral tradition. So instead of notebooks or laptops, students often brought knitting projects to class.

The winner of the 2011 Mount Holyoke Faculty Award for teaching, who also served as interim dean of religious life in 1997-98 and was faculty lecturer for two alumnae trips abroad, Grayson retired from the College at the end of December, not before teaching the course one last time.

“There are generations of alums from this class,” Grayson says. And for the last meeting, he brought one back to campus. On December 6, Grayson and his students met at All Saints’ Episcopal Church in South Hadley, where Funteller Thomas Jackson FP ’94, a Baptist minister from Pennsylvania, shared her life through storytelling and Gospel singing.  The class meeting turned into a celebration of Grayson’s career, with former students and colleagues from the religion department turning out to honor him and the music that, Grayson says, is “in my bones.”

4 responses to “The Gospel of “Spirituals & the Blues””