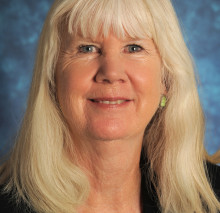 On July 20, 1969, when Beth O’Leary ’74 was an AFS exchange student in Norway, her host family watched a news report of Apollo 11’s lunar touchdown and humans’ first steps on the moon. The broadcast was in Norwegian, except for: “The Eagle has landed.”

“It was just wonderful to hear that,” O’Leary says. “I felt a particular pride. ”She didn’t know it then, but that historic day would shape her life’s work. O’Leary is an expert in the emerging field of space archaeology. An associate professor of anthropology at New Mexico State University and coeditor of the 1,000-plus-page Handbook of Space Engineering, Archaeology, and Heritage, she has dedicated herself to preserving the artifacts—more than 100 of them, from a flag to a footprint—left by Apollo 11 astronauts Neil Armstrong and Buzz Aldrin at their landing site, known as Tranquility Base.

O’Leary got interested in space archaeology in 1999, when a graduate student in her cultural-resource-management seminar asked her if historic-preservation laws applied to objects in outer space. “It was such a good question,” she says. “I had no idea how to answer it. And so I became intrigued.”

With a grant from NASA she helped establish the Lunar Legacy Project, which aims to preserve the archaeological information and historic record of Apollo 11. “We need to prepare for the future because in fifty years many travelers may go to the moon,” the website says. “If the site is not protected, what will be left?”

O’Leary and her team also launched an effort to designate Tranquility Base a national historic landmark and, from there, a UNESCO world heritage site. It’s a lofty goal; never before has a site not located on Earth achieved such status. Their first successes came in 2010, when both California and New Mexico listed the objects at the site on their state historic registers.

With the half-century anniversary of Apollo 11 approaching, O’Leary says she hopes the current level of public interest in the moon mission will build to a tipping point where world heritage status for Tranquility Base seems more fate than pipe dream. “As we reach the fifty-year mark, people are saying, ‘Yes, these sites are significant, and yes, we need a way to preserve them for future generations.’”