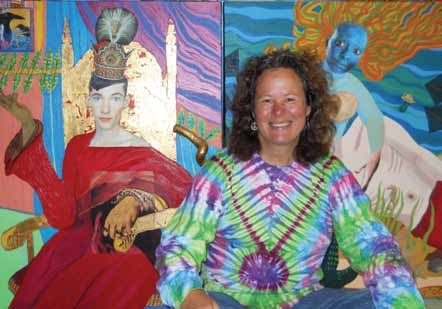 An androgynous figure on a throne, crowned and red-robed, stares frankly at the viewer. Artist Brenda Phillips ’78 can easily name the origin of her partly collaged canvas, rendered in saturated pastels and emerald-colored paints: William Butler Yeats.

After complaining of gradual memory loss ten years ago, Brenda consulted physicians, but received no concrete diagnosis. With a family history of dementia-related illnesses—some relatives had died young (her mother, age sixty-four, died of Parkinson’s)—Brenda was determined to not fall prey to a legacy of ill health. Her resolve and abiding spiritual faith led her to the task of keeping her mind agile and preventing further worsening of her memory.

“In 2002, I read every book that could be gotten about memory loss,” said Brenda, “and they all recommended memorizing as a strategy for keeping your brain functional. So I decided that I was going to memorize a poem by my favorite poet, Yeats.”

One memorized poem turned into over a dozen committed to her memory, all of which informed one of Brenda’s most important artistic series: the “Yeats Collection.” All sixteen paintings in the series are interpretations of sixteen poems, created after Brenda had “internalized a poem, which then magically appears on the canvas.” She calls this mode of working “the right brain”—a nonverbal/visual mode of painting without conscious intent. What had started as a fundamental exercise in brain agility resulted in a flurry of artistic expression.

While Brenda still hopes for a diagnosis, and indeed a cure, for her memory loss, she continues to create art, sell paintings, and participate in local exhibitions. Her studio, which her husband built for her, is conveniently situated at their farmhouse along the Connecticut River, in Plainfield, New Hampshire—a fitting venue for her current series of nature-inspired abstract paintings. Brenda’s work can be viewed at brendaphillips.com.
—By Kris Halpin