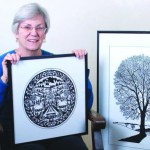 The intricate designs that illuminate Susan Throckmorton’s papercuttings delight the eyes, but make your hands hurt just looking at them. There are dense forests, slender cactus needles, fruit and flower montages, and birds, lots and lots of birds.

Papercutting is an ancient art that is still celebrated in various forms by folk cultures around the world and involves creating elaborate scenes and motifs on paper using a pair of very small, very sharp scissors. Picture the paper snowflakes you cut out in grade school—on steroids.

While many paper cutters work in color, Sue works primarily with paper that is black on one side and white on the other. She sketches her intended drawing on the white side and then begins to cut, starting usually from the inside and working out. The black side of the paper is ultimately set, face up, on a sheet of white paper.

“I always have been interested in folk culture,” she explains from her apartment in Warsaw. Over the course of a teaching career that took her to India, the former Yugoslavia, Finland, Indonesia, and finally Poland, she amassed a large collection of folk sculpture, carpets, textiles, and naïf paintings.

She got serious about papercuttings when she made one as a gift for friends who were leaving the country, and then made some to illustrate a book of animal poems for children, The Humply Rumply Beast, which she wrote.

Sue caught the eye of art historians in 2000 when she exhibited her work in Krakow, Poland, and has subsequently exhibited in Holland, the US, Germany, and China. She is an active member of the Guild of American Papercutters.

Sue is currently finishing another children’s book illustrated with her papercuttings but also does lots of commission work for clients—including classmate Bonnie Ulrich. Check out Sue’s work at www.papercuttings.waw.pl.