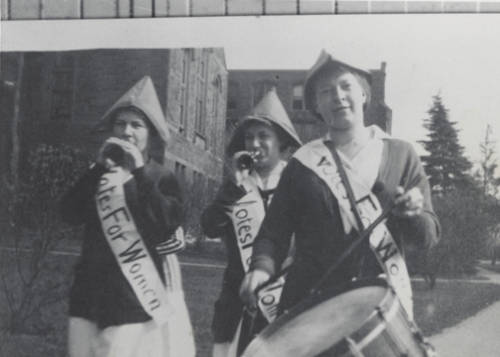 What were the hot topics on campus and in the world when you were at MHC?  We asked, and you answered, on the Alumnae Association’s Facebook page (www.facebook.com/aamhc).

We could fit only a few comments into the printed Quarterly; here are all the comments. Add your own comments at the end of this list.

9-11. I remember getting an IM from a friend over at UMass that morning that a plane had just hit one of the twin towers… I thought he was messing with me… that totally couldn’t be true. I walked downstairs for breakfast and I saw a hoard of my Abbey-neighbors huddled around the common-room TV watching as the second one hit. Women walking around campus like zombies… classes canceled… families in New York… no one knew what was happening… no one could get through on their cell-phones. No one knew what to do… I think a lot of us wondered “why”?

Trial of OJ Simpson- “… if the glove doesn’t fit, you must acquit.”

I think I still have a t-shirt somewhere that reads ‘Mount Holyoke College against Apartheid’.

Hmm…there was divestiture, and whether we should allow Coke or Pepsi on campus since they still had significant investments in South Africa…And then there was the first Gulf War.

Burning question in 2004… “Do the Red Sox have what it takes to go all the way?” We plastered the halls of Buckland with the answer… “Yes!”

The Asian House (not sure what it is called now). MHC denied funding their group home on campus. Dozens of students marched through the registrar building and several students sat-down at President Creighton’s office. The issue was truly heated by the talk of affirmative action and whether it was still necessary. It was 1997.

In the fall of my first year, 1992, the big issue was Bill Clinton’s first presidential run / election. I remember my mother reading that Hillary Clinton had invited her entire Wellesley class to the inauguration and remarking, “maybe someday a woman in your class will become first lady and invite you all to her husband’s inauguration.” When I immediately responded, “maybe someday a woman in my class will become president and invite us to her own inauguration,” we both realized that Mount Holyoke had already altered my thinking about gender and politics forever.

Serious conversations about current events: apartheid, President Reagan was shot, John Lennon was shot, and the Pope was shot.

I think Ellen Cosgrove and I were there at the same time as her recollections closely match mine. I remember living in MacGregor with the Iranian hostages on the news every day. There was an Iranian girl in the dorm and, to my surprise and delight,, we embraced her as she struggled with the competing interests of loyalty to family and freedom and being an Iranian national.

‎1967-71 it was Vietnam, Cambodia, tuning in turning on and dropping out. We were into everything.

Ellen Cosgrove hit many of the highlights.. i would add Anwar Sadat’s assassination and the first Space Shuttle flight..

… though an important question we constantly pondered was how anyone could think we would want fruit for M&Cs.

Class of 1998 – the Oklahoma City Bombing, watching the OJ Simpson verdict with a large group in Blanchard.

Class of 08 — the continuation of the Bush administration (after watching the Bush vs. Kerry election during the fall of our first year), the anticipation of the 08 election when we were seniors, the war in Iraq, the new residence hall (Creighton), the Red Sox winning the world series twice — when we were firsties and seniors, marriage equality, transgender rights.

’85 I remember being so excited when Geraldine Ferraro came to UMass — imagine a woman VP candidate — it was very empowering at the time. On a lighter note — everyone gathering to watch Dynasty every week.

I was the Student Government President Class of ’05 – And we created a whole survey to coincide with the Plan for 2010 to achieve real student input impacting the campus, new residence hall, and other academic changes that would occur as part of the Plan. This did amazing things to the women on campus and made us really feel as if our voice made a lasting impression on what our school would look like academically, socially, and residentially after we were gone. In previous years the voter turn-out for SGA elections had been less than 20% and our year we increased this participation to over 50% – It may seem small but it made our Executive Board feel as if we could move mountains!!!

‎1982-86 I remember as ongoing debates South African divestiture and whether the dorm doors should be locked.

The class of ’04 talked about the closing of the first dining halls and debates on getting rid of MHC. We saw an end of an era when Porter Grab and Go came on board.

Class of ’03 here. Early in our college years the main topic was the Bush/Gore election. It was very heated especially for someone who came from an entirely republican town.
Campus-wise we dreaded the beginnings of centralized dinning. Sadly, our worst fears for community dinning have been realized.

Of course the biggest was 9/11. I was in the Wider dining hall eating a bagel, still in my pajamas when the checker (whose name I can’t remember, but she was very loved by the students) told me a plane had crashed into the Trade Center. Many students and dining hall workers gathered around the TV in the living room entranced. We watched the 2nd plane hit live. I was the SA on my floor, and one of my residents thought her mom was shopping at the World Trade Center that day. It was very scary trying over and over to call her and not getting through. We eventually found out that she was ok. Classes were canceled. We tried to go donate blood, but they had too many people already. The whole day was a blur of trying to think what to do to help and trying to comprehend what it all meant.