Emmalie Moseley ’10 holding her laptop with image of Carly Peltier ’13, joining in via Skype from Argentina.

MHC alumnae residing in Brisbane, a small town next door to San Francisco, may have set a record of sorts when they decided to get together recently. Anja Salmela Miller ’56, Elna Miller ’87, Suzanne Howard ’89, and Emmalie Moseley ’10 gathered at Brisbane’s MadHouse Coffee, and were joined remotely by Carly Peltier ’13 via Skype from Argentina.

In addition to sharing their joy of living here and finally meeting, the discussion turned to demographics: The little city of Brisbane has a population of only 4,000, which would make the “density calculation” of MHC representation here one Mount Holyoke woman per 1,000 residents. After Carly’s graduation next year the ratio will, of course, rise even higher.

The question then arose whether other places on the “Left Coast” could boast a similar, relatively high number. Alumnae in Brisbane would be interested in knowing the answer. 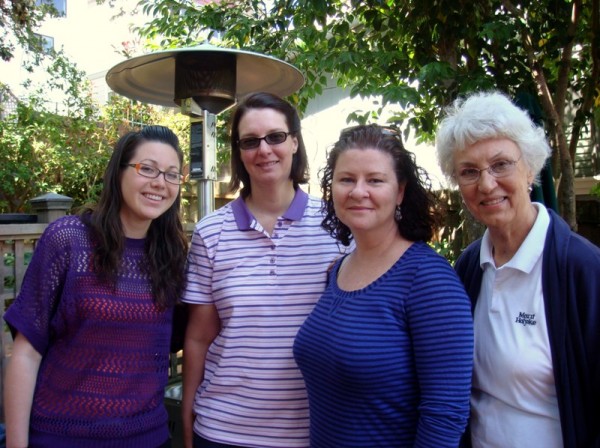 One response to “Calif. Town Boasts a High Density of MHC Alums”