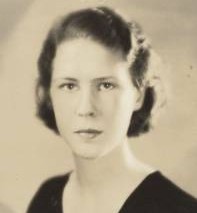 Virginia Hamilton Adair ’33 wrote her first poem at the age of two, yet didn’t publish her first book of poetry until she was eighty-three and blind, seven years before her death. The New York Review of Books described Ants on the Melon: A Collection of Poems as “extraordinarily moving,” and critics compared Adair to Eliot and Frost, one going so far as to exclaim that she was “the best American poet since Wallace Stevens.”

Last year, best-selling author and professor of neurology Oliver Sacks published the book Hallucinations (Knopf ), in which he relates stories of both his patients’ and his own visions in order to illuminate the inner workings of the mind. Adair features prominently in the book, as late in life she developed Charles Bonnet syndrome, a condition that causes patients with visual loss to have complex hallucinations. Dictating her visions, which were recorded in a journal, she describes being “treated to stabs of sapphire, bags of rubies scattering across the night, a legless vaquero in a checked shirt stuck on the back of a small steer,

bucking, the orange velvet head of a bear decapitated, poor thing, by the guard of the yellowstone Hotel garbage pit.”