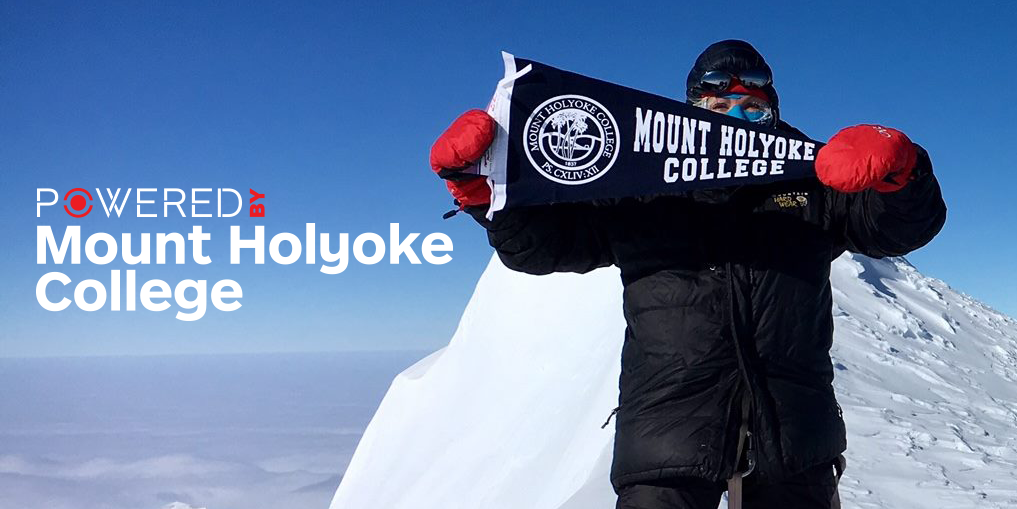 On Christmas Day 2016 Catherine Gibson ’77 summited Mount Vinson. At an elevation of 16,050 feet, this highest peak in Antarctica is referred to as “the top of the bottom of the world.”

“Doing an extreme climb like Vinson has always been on my bucket list,” Gibson says. “Earlier [last] year I decided I wasn’t going to wait any longer—I’m not getting any younger either!—and I decided to try for this elusive peak.”

Her passion for climbing was ignited at Mount Holyoke, when she hiked in the White Mountains as a member of the Outing Club. Since then Gibson has successfully ascended challenging mountains around the world, including Denali, Aconcagua, Mount Kilimanjaro, Mont Blanc, Mount Elbrus, and several of the Colorado Fourteeners. It should come as no surprise that her favorite Mount Holyoke tradition and memory is of Mountain Day.

In 1990 Gibson became the third American woman, the fourteenth woman ever, and the oldest woman—at age thirty-five—to scale the world’s highest peak, Mount Everest. The last title was snatched just a few years later by another alumna, Marjorie Cross ’65!

Gibson, who lives in Seattle, Washington, is a business mediator who helps to resolve board and executive level conflicts in closely held businesses and a volunteer on several nonprofit boards, including local chapters of Goodwill, the YMCA, and the Rotary Club, as well as the Washington Women’s Foundation and the Rainer Club.

“For my work and for my volunteering, it’s all about the people,” she says. “I get excited when there are opportunities to collaborate and to make a difference.”

Gibson has spent her time since college balancing her professional life with staying active and fit and is committed to continue learning and achieving both in her work and her climbing even past her eventual retirement.

This year Gibson will attempt her twentieth ascent of her local mountain, 14,411-foot Mount Rainer. She is also already well on her way to achieving her goal of completing the Seven Summits (reaching the peak of the highest mountain on every continent). Now having stood atop Mount Vinson, she’s completed six of the seven. “Only Australia remains,” she says, adding casually, “It’s a straightforward day hike to the top of Mount Kosciuszko (7,310 feet).”