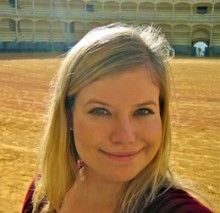 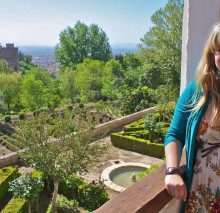 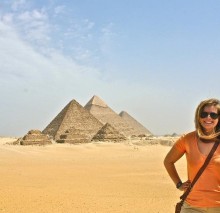 at the Pyramids, Giza, Egypt 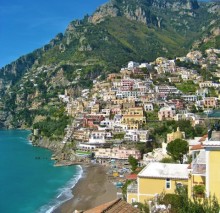 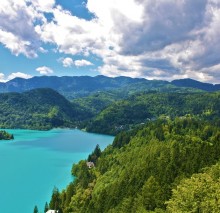 For many, travel is a rare vacation treat; for others no more than a necessary evil. For Liz Carlson ’10, it’s a series of grand adventures. It all started with a trip to Spain at age sixteen. “Eight years and twenty-five countries later,” Carlson writes in her blog, Young Adventuress, “my wanderlust has only grown and the list of countries I want to visit [is] longer.”

While other travel blogs share hotel details or snapshots of local landmarks, Carlson’s posts have headlines such as “That time I almost got deported (twice),” “Canyon Jumping in Interlaken,” and “Almost Dying in Dublin.” Her posts are thoughtful, but also sassy (“I wanted to punch the teeth out of the next chauvinistic jerk who dared to call me Barbie and [offer] camels for my hand in marriage”) and often surprising (“Paris and I are not on good terms”…”Versailles really gets on my nerves”).

And this woman can write. Her blog is at the top of the Huffington Post’s “Travel Blogs to Watch in 2013” list.

“For me, ticking cities, countries, passport stamps, and experiences off my travel bucket list is important, but that’s only half of it,” she writes. “The other, more important half, is what I learned.…Traveling and self-growth are irrevocably linked.”

After two years in Spain as an English teaching assistant—first in Córdoba and then in Logroño—she returned home to DC this past fall. But she sees this as a temporary pause in the process of becoming “the world traveler I dream of being.”

What’s still on the bucket list? “I want to ride elephants in Thailand. I secretly wish to climb to Everest base camp. I need to prove that I can live in another country besides Spain. I have a hankering to cycle Bolivia’s Death Road. I long to learn French in a little village in Provence. I have an insane desire to bungee jump off Victoria Falls. I yearn to chase the Aurora Borealis in Iceland and I hope to climb Mount Vinson in Antarctica one day. And so much more. … I am on a journey to self-discovery around the world.”

Next up: Moving to New Zealand for a year, while turning her blog into a business and travel writing into a career.

• Keep up with Carlson’s adventures on social media:

• Read her five reasons everyone should travel