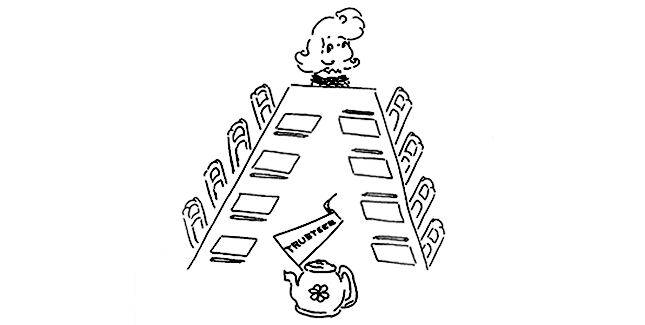 The summer 1963 Alumnae Quarterly included a four-page illustrated article by “two very wise alumnae,” Henrietta Howell Slote ’51 (Hetsy) and Elizabeth Chickering King ’44 (Betsy). The article was written in response to a spring 1963 article that characterized students as “angry” undergraduates and alumnae as “wise.” Slote and King then, according to the Quarterly, “pooled their ideas and their talents to present in prose (by Hetsy) and in picture (by Betsy) the inner workings of the Alumnae Association.” An excerpt of their piece follows.

“What senior has not held suspect the mysterious force that appears to weld alumnae into an endless phalanx of unquestioning loyalty, steam-rolling the perspective out of class after innocent class as it graduates? We don’t mean to discourage you, ’63, but even we recall.”

“The following . . . is a brief anatomy if Your Alumnae Association. . . . And those of you already “wise alumnae” who find yourselves in a dawdling mood and the Quarterly in reach—in case you can’t quote Article Ten of the Association bylaws verbatim—nobody minds in you kibbitz.”

“If you have ever been involved in any organization, from the United Fund to the PTO (and, ’63, it cannot be hoped very many of you will ultimately escape) you know uncannily that the noun which will trip the heels ‘Participation’ is ‘Support’ and somewhere in the next breath will lurk ‘Money’.” 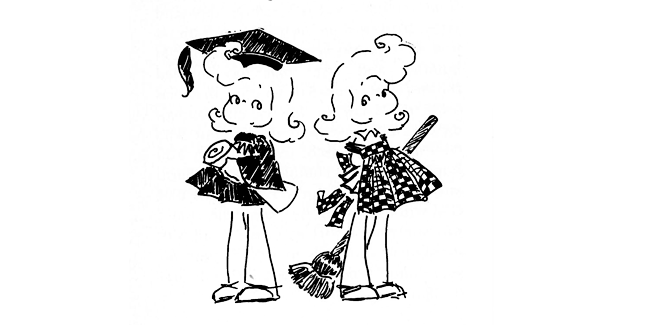 “Luckily for those of us who can not realistically aspire to a place on the alumnae fund’s leadership donors list in the near future, there are ways to ‘advance the interests’ of Mount Holyoke besides financial contributions. . . . One of these is keeping Mount Holyoke in the eye of local communities (‘in a favorable light’ the Handbook for Club Officers adds nervously) or plain, unadulterated publicity.”

“Spiritually speaking, we may shoulder the laurel chain year after year, but confidentially we always know that neither it nor we are the same from one year to the next.”