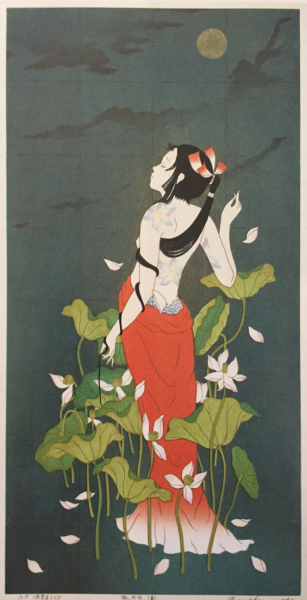 This summer the College Women’s Association of Japan (CWAJ) will host the print show Kanreki: A 60-Year Journey, marking the sixtieth anniversary of the CWAJ Exhibition of Contemporary Japanese Prints.

The origins of CWAJ—a volunteer, nonprofit organization based in Tokyo—can be traced back to 1949 when alumnae clubs from Mount Holyoke College and Wellesley College joined together. The group initially provided travel grants to Japanese students who had received scholarships to attend American universities but lacked the funds for transportation overseas.

Recognizing the importance of higher education and its benefits in contributing to the future success of postwar Japan, the president of the Mount Holyoke Club of Japan led efforts to gain approval to launch the travel grant program. By fall of 1949 enough funds were raised to help nine Japanese students travel to the United States to pursue their education. Within a year the organization expanded to include all US college students in Tokyo.

In the mid-1950s, during a time of increased demand for Japanese students studying abroad, the organization expanded its fundraising efforts beyond charity balls, bazaars, and donation campaigns, debuting a print show inspired by the late author and expert of Japanese prints Oliver Statler and his publication Modern Japanese Prints: An Art Reborn. The show was a success, building the foundation for future fundraising and helping to establish the organization as an important presence in the Japanese art community.

Over the past sixty years, the CWAJ print show has become an internationally recognized and highly acclaimed exhibition. Says current CWAJ member and former president Keiko Uchida Yoshimura ’73, “CWAJ and its print show is a wonderful example of the Mount Holyoke legacy that took root in Japan. In a war-devastated country women from two enemy countries became united by friendship, love, and the Mount Holyoke spirit, standing up for the younger generation and their education.”

The exhibition runs through September 14, 2016, at Highfield Hall and Gardens in Falmouth, Massachusetts. Learn more about CWAJ and the show.

One response to “Connections: United by the Mount Holyoke Spirit”