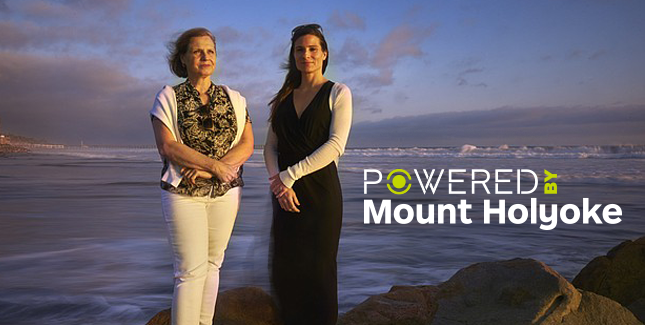 Since 2014 NASA has invited the mother-daughter team of Marilyn Bruno ’69 and Cynthia Bruno Burzell ’01 to speak at conferences about their work. In 2006 the two started the biotech company Aequor, which provides remedies for biofilm, a glue-like substance that helps bacteria attach to surfaces. Biofilm is, according to NASA officials, “‘the number one impediment to long-duration manned space travel,’” says Bruno. “Every astronaut returning to Earth has had a biofilm-related infection. Nobody could survive the long trip to Mars or a stint on a Moon colony safely.”

Biofilm isn’t just a problem in space. “Plaque on your teeth is a biofilm,” Burzell says. “In healthcare, the problems arise because that same biofilm can form inside your body, in your lungs or in your heart, where you cannot scrape it off. Biofilm is associated with eighty percent of chronic, incurable infections and ninety percent of hospital acquired infections.”

“Our expertise complemented each other. I focused on the science and she built the business.”Cynthia Burzell ’01

Burzell, who is the chief scientific officer for Aequor, was a biology major at Mount Holyoke and went on to St. George’s University in Grenada for her master’s degree in marine biology and doctorate in medical microbiology. As part of her thesis work, she discovered effective, non-toxic chemicals that remove biofilm and prevent its formation.

At the same time, Bruno was working as an economics officer with the US Foreign Service, stationed in Barbados and responsible for seven countries of the Eastern Caribbean. Among her other work, she became aware that toxic biocides used to repel biofilm on marine vessels were being banned and knew there would be a market for a safe alternative.

Bruno spearheaded the start-up and took on the role of chief executive officer. She has been finding advisors, identifying companies that need Aequor’s solutions, and raising funds through friends and grants. The company has received $8 million for testing and pre-clinical trials from the National Institutes of Health, US Department of Defense, US Department of Energy, and NASA.

“NASA supports our putting together experiments to take place inside the International Space Station and, via airlock, in outer space, and has set up a simulation to test efficacy of several of our molecules in one of the space flight centers,” says Bruno.

“Biofilm forms thicker and more virulently in space,” Burzell says. “It grows very well in water, and inside the International Space Station they have a piece of equipment that recycles the waste water back into purified potable water for the astronauts so that NASA doesn’t have to carry many tons of water up to the ISS. This system can get contaminated with biofilm.”

“It is my great thrill to work with Cynthia—a truly gifted scientist and wonderful daughter!”Marilyn Bruno ’69

The grant money and the work they’ve been doing are having an impact. Last year they won NASA’s international iTech competition in the Life Support category, “knocking out the real rocket scientists!” says Bruno.

“The chance to make a difference while working with my mother has been wonderful,” Burzell says. “It’s given me a way to continue to value my family and cultural histories and develop a way to help the world using new technologies to enhance effective measures found in nature.”