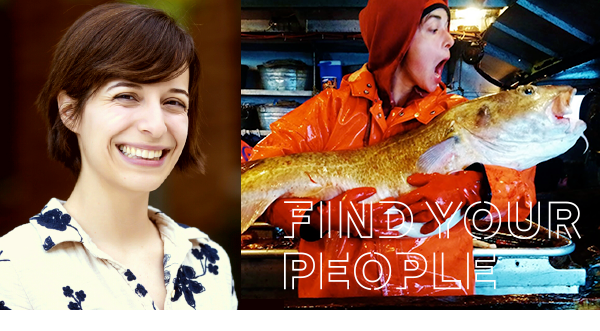 Shahla Farzan ’10 is a doctoral student in ecology and reporter at KBBI AM 890, a small NPR affiliate in Homer, Alaska. As part of her job at the radio station, she hosts Morning Edition each day. Recently, she tweeted at us.

“I read community announcements on air as part of each broadcast,” Farzan says. “These can range from ‘There are two loose horses running down the road’ to upcoming local events. One morning, I read an announcement about a lecture on halibut fishery research. A quick Google search revealed that the lecturer, Elizabeth Figus, was an MHC alumna and a fellow graduate student. I sent her a somewhat embarrassing email along the lines of ‘You went to Mount Holyoke, too? Can I interview you for a radio story? Also, would you like to have dinner?’”

You went to Mount Holyoke, too? Can I interview you for a radio story? Shahla Farzan ’10

“I was in Homer to conduct outreach for some of my research, and Shahla connected the dots,” Elizabeth Figus ’09 says. “I had asked her radio station to run a short blurb about my outreach event, and Shahla invited me in to do an interview about my research!”

Though Farzan and Figus were studying on campus at the same time, they never knew each other while they were at Mount Holyoke. Farzan studied biology and English and became interested in radio broadcasting as a world music host for WMHC. Figus double majored in international relations and sociology and has been working seasonally at Alaskan fisheries since the summer after her first year at Mount Holyoke.

Listen to the interview that brought them together.