On the Run with Active Alums 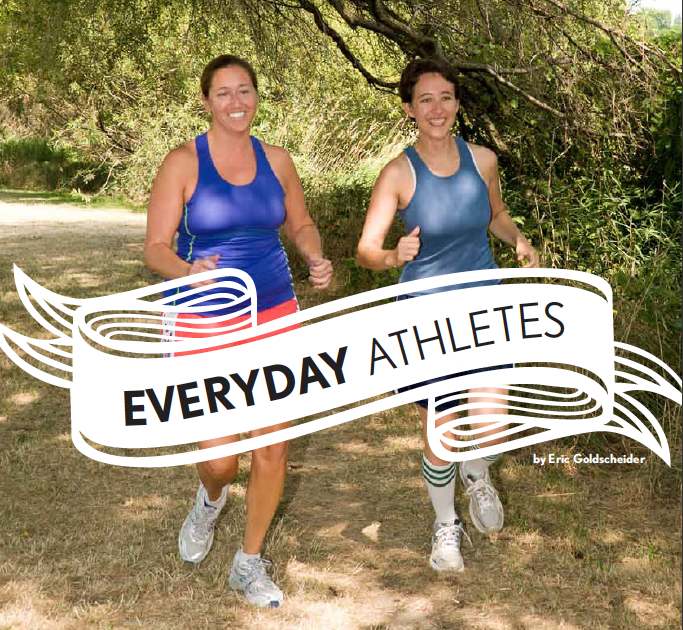 Leah Riley Thompkins ’03 always wanted to do a marathon. But she had never run more than three consecutive miles and didn’t want to be pounding the pavement alone. So the Seattle electrochemist called her friend Katharine Sjoberg ’03 to see if they could run a marathon together. Sjoberg, also not a runner, thought she had an “out” when she agreed only on the condition that they win. Undaunted, Thompkins came back with the solution. If they did it as a three-legged race, they might be the only ones in their category. In that case, simply finishing would equal winning in the most basic sense of the word. Two weeks later, the pair fastened their ankles together with a length of red cotton cloth, took about five practice steps, and showed up the next morning at the starting line of the Los Angeles Marathon on a ninety-five-degree day in March. Seven hours and forty-three minutes later, they mustered a final jog to the finish, where they were carried to the medical tent to rest for about three hours.

That’s one way of staying active, though not the recommended path to developing a fitness regimen. Other Mount Holyoke women—from recent graduates to octogenarians—have taken up diverse activities including golf, boxing, swimming, ice hockey, sailing, water aerobics, yoga, bicycling, and, yes, running, to get into or stay in shape. Some were almost militantly anti-sports when they were in college and only later in life encountered the thrill a little competition can inject into the task of filling their lungs with air. Others rekindled habits learned in their youth, often influenced in ways they only later learned to fully appreciate, by Mount Holyoke’s physical education requirement. Many realized that they feel better physically and mentally when they incorporate movement into their daily routines. Still others were prodded by a health scare into paying closer attention to their bodies. 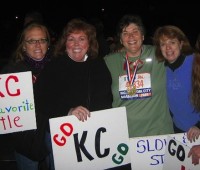 “I used to drag myself to the gym occasionally,” says Jenna Steigerwalt ’01. That was until last January, when she discovered ice hockey. It took her nearly three months to even tell her family, fearing they would laugh at her. Living in Phoenix while pursuing a PhD in English, she developed her obsession by watching the Coyotes, the hometown NHL team, practice. Now she plays right wing on a coed team. “It’s a hell of a workout, but I enjoy it so much more than going to the gym. And it’s the most team sport there is because nobody can out-skate the puck.” Now, if she misses a workout, she must answer to herself and her teammates. The key to staying in shape, she has found, is to “find something you really love doing.” 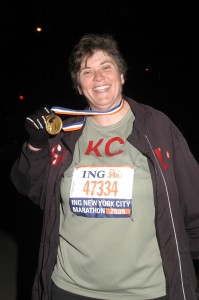 KC Maurer ’84 had three heart attacks in 2003 and 2004 when she was in her early forties. It took years to identify the culprit, but in the meantime she set about improving her overall health. Three hundred and thirty pounds at the time, “it became apparent that I was going to need to do something other than just be on medication for the rest of my life,” she says. Finishing a marathon seemed a worthy goal and so, slowly at first, she started training. She was yanked by race organizers from her first marathon in New Jersey at the thirteen-mile mark because she wasn’t keeping pace to finish before the event was to end. She signed up for the New York Marathon in 2006 and in a little over five months did more than 400 miles in roadwork and practiced yoga; she eventually lost 110 pounds.

The motivation didn’t all come from within. Sue Fitzgerald ’84 undertook a similar goal, but in Ohio. She and Maurer often ran and walked up to twenty miles “together,” connected by hands-free cell phones. “That got me off the couch,” says Maurer. Her marathon time ended up being 7:30:20, just under the eight-hour limit and a pace of about 3.5 miles an hour. “Slow and steady was my mantra,” she recalls. “In fact, one Mount Holyoke friend held a sign: KC: Our Favorite Turtle, Slow & Steady.”

Ann Neuberger Aceves ’56 of Santa Fe, and Ruth Anne Pesce Bortz ’52 of Palo Alto, on the other hand, are straddling eighty and still take their speed seriously. Aceves swam in eleven consecutive national Senior Olympics swimming championships and qualified for her twelfth. In July she returned from the New Mexico Senior Olympics with four gold medals and two silvers, and having broken two of her six state records. Bortz was the first runner up in her age group in the 2011 Boston Marathon. She bested her age group in that race at the start of her previous two decades. Her husband, Dr. Walter Bortz, writes books on living to be 100, so Ruth Anne jokingly intimates that she’s obligated to keep up the pace for almost two more decades. Bortz competes in a marathon every year (usually finishing in about three and a half hours), but 100-mile foot races are her best events.

Stories like these warm Laurie Priest’s heart. MHC’s director of athletics for the last twenty-three years sees herself as the temporary custodian of the part of Mary Lyon’s legacy that prompted Lyon’s directive that early Mount Holyoke women walk two miles (or thirty minutes in case of snow) every day. “Part of a liberal arts education is to recognize that health and fitness are important to an overall ability to be effective in the world at large,” says Priest.

More than half of current students go above and beyond the three-semester PE requirement. In addition to the typical intercollegiate and club sports they have options—forty in all—such as yoga, dance, fencing, Pilates, tai chi, and a course Priest teaches each fall on hiking in the Pioneer Valley. “Our approach is really to try to connect those women in a positive way to a physical activity that helps them mentally, physically, and emotionally to feel better about themselves,” says Priest, “We really want Mount Holyoke women to continue to be active all their lives.”

Ashley Brown ’05 is pursuing a doctorate in American studies in Washington, DC. She began thinking about running five years ago and decided to start small, on a treadmill. With added strength she discovered the thrill of running cross-country to the point where she now thinks of her runs as “sixty- to ninety-minute vacations” from her computer screen that she takes three or four times a week. “There is something they call the runner’s high,” says Brown. One day “after running four to six miles and cooling down I just had a Zen feeling. It was this wonderful release of energy and tension. Sometimes I really did feel as if I was walking on air.” 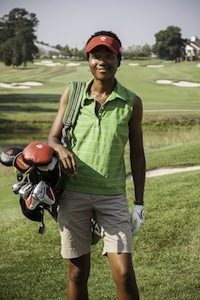 Ashley Brown ’05 discovered a passion for golf after years of running.
Photo by Lise Metzger

Thompkins and Sjoberg may not have experienced that in their three-legged marathon. “We both lost multiple toenails,” remembers Thompkins. “I couldn’t walk up stairs for weeks without dragging myself by my arms, which was unfortunate because I had a second-floor apartment.” Later that year she trained for the AIDS LifeCycle from San Francisco to Los Angeles, and completed it with ease.

Clearly there’s no stopping a determined MHC woman—Deb Dimes Cameron ’73 ran a 10K race two weeks before giving birth to Susan Cameron ’07! “And I didn’t come in last,” says the elder Cameron. For her, exercising has always been a way of life, and it doesn’t always involve a gym or a track. She volunteers at a food pantry. “Lifting canned goods and stocking shelves, even that’s a workout,” she says. “I just feel better when I’m active.”

» Read More: Get off that Couch
The most common tip the recreational athletes interviewed for this article gave was simply: get started.

Your first gestures may be as small as parking a little farther from the store, or slightly accelerating your pace on a flight of stairs, says Peggy Daus Schwartz ’62, who did four years of water ballet at Mount Holyoke and is still active. She also speaks of the need to block out time for exercise. “I’ll tell people, ‘sorry, I have an appointment,’ rather than say I have to go to the gym.”

Joyce Stavro Vyriotes ’96 played club rugby in college but only got into running later, when she had a job setting up half-marathon training programs to promote health while raising money for a cancer organization. If she was going to talk the talk she needed to walk the walk— literally. It became a revelation that running does not preclude walking. “I didn’t know you could combine running and walking; that really helped me,” she says. “Instead of just running as far as you can, which isn’t very far, and then feeling discouraged, just run a little more and walk a little less each day and pretty soon you’ll be running some good distances.” Even though she still sometimes has to overcome inertia, Vyriotes can’t imagine not running, and says, “I’ve never finished a run and wished I hadn’t done it.”

One response to “Everyday Athletes”