The following is a list of books published by alumnae and faculty, or about alumnae, and received at the Alumnae Quarterly offices since the publication of the summer 2017 issue. To submit your work, please email quarterly@mtholyoke.edu. 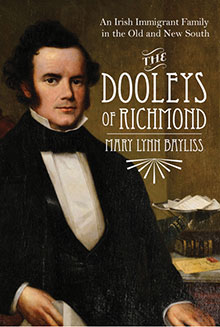 The Dooleys of Richmond: An Irish Immigrant Family in the Old and New South

The Dooleys of Richmond is the biography of two generations of a dynamic and philanthropic immigrant family in the urban South. While most Irish Catholic immigrants who poured into the region in the nineteenth century were poor and illiterate, John and Sarah Dooley were affluent and well educated, and they became leaders in business, education, culture, and politics in Virginia.

Mary Lynn Skinner Bayliss ’64 is a writer and lecturer who has published work in Virginia Cavalcade, Richmond Quarterly, Richmond Times-Dispatch, the Dictionary of Virginia Biography, and Encyclopedia Virginia. 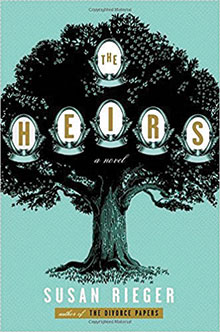 The Heirs: A Novel

Six months after Rupert Falkes dies, his widow and five adult sons learn that an unknown woman has sued his estate, claiming she had two sons by him. This novel follows the brothers as they are pitched into turmoil, at once missing their father and feeling betrayed by him, while their mother, in disconcerting contrast, shows preternatural composure.

Susan Rieger ’68 is the author of the novel The Divorce Papers. She is a graduate of Columbia Law School and has worked as a residential college dean at Yale University and as associate provost at Columbia University. 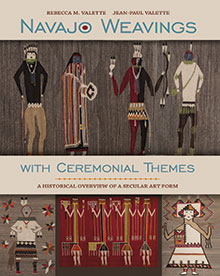 Navajo Weavings with Ceremonial Themes: A Historical Overview of a Secular Art Form

Featuring more than five hundred photos and maps, this is the first comprehensive, research-based history of Navajo weavings. With imagery inspired by tribal sacred practices, the book includes never-before-published photographs of weavings and detailed annotations.

Rebecca Loose Valette ’59 and her husband, Jean-Paul, have been collecting and researching Navajo weavings for more than forty years, amassing more than one hundred textiles. Their work has been published in American Indian Art Magazine and Hali, and they have curated two museum exhibits, including Dancers of the Nightway at the Mount Holyoke College Art Museum in 2016. 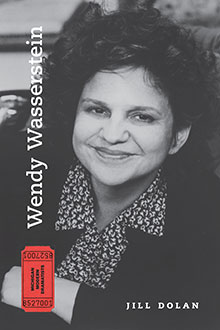 Playwright Wendy Wasserstein ’71 wrote topical, humorous plays addressing relationships among women and their families, taking the temperature of social moments from the 1960s onward to debate women’s rightful place in their professional and personal lives.

Wendy Wasserstein provides a critical introduction and a feminist reappraisal of the significant plays of one of the most contemporary American women playwrights. Following a biographical introduction, chapters address each of her important plays, situating Wasserstein’s work in the history of the US feminist movement and in a historical moment in which women artists continue to struggle for recognition.

Jill Dolan is dean of the college and Annan Professor of English and professor of theatre at Princeton University. She received the George Jean Nathan Award for her blog, The Feminist Spectator. 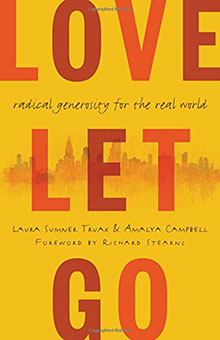 When LaSalle Street Church in Chicago received an unexpected windfall, its leaders made the wild, counterintuitive decision to give it away. Each church member received a check for $500 with the instruction to go out and do good in God’s world. In Love Let Go, readers witness how a church community was transformed by the startling truth that money can buy happiness—when we give it away.

Amalya Horgan Campbell ’92 is a marketing consultant in Wilmette, Illinois. She earned her MBA from Harvard Business School and has led stewardship classes at LaSalle Street Church for more than 12 years. 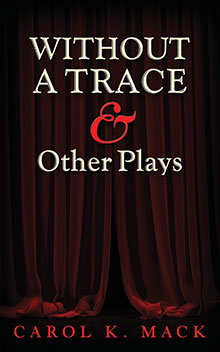 Without a Trace & Other Plays

Without a Trace & Other Plays is a collection of four award-winning plays, Without a Trace, The Accident, A Safe Place, and Territorial Rites, written by Carol K. Mack.

Carol Klein Mack ’60 is an award-winning playwright whose plays have been performed in theatres throughout the country and in Scotland and Japan. Her awards include a winning place in the Telluride Playwrights Festival for her play GETGO, a Rockefeller Foundation fellowship, the Stanley Drama Award, the Julie Harris/Beverly Hills Theatre Guild Awards, a John Gassner Award, and finalist in the Jane Chambers Award. Her plays appear in four editions of The Best American Short Plays. 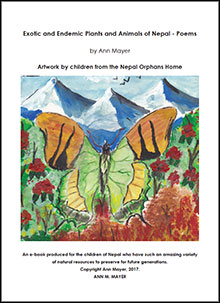 Exotic and Endemic Plants and Animals of Nepal

Animals of Nepal is an ebook of children’s poems about wildlife in Nepal, written by Ann Mayer and with colorful artwork and animal illustrations by children from the Nepal Orphans Home.

Ann Mayer ’60 majored in zoology at Mount Holyoke. After obtaining a master’s degree in education from Harvard University, she taught in the primary grades for 21 years, mostly in the Churchville-Chill district near Rochester, New York. In her retirement, Mayer has combined a lifelong interest in poetry and a fascination with animals to write poems for children. This is her second book of poems about wildlife in Nepal. 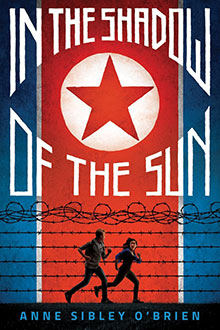 In the Shadow of the Sun

North Korea is known as the most repressive country on Earth, with a dictatorial leader, a starving population, and harsh punishment for rebellion. Not the best place for a family vacation. Yet, in this novel, that’s exactly where Mia Andrews finds herself, on a tour with her aid-worker father and fractious older brother Simon. Mia was adopted from South Korea as a baby, and the trip raises tough questions about where she really belongs. Then her dad is arrested for spying, just as forbidden photographs of North Korean slave-labor camps fall into Mia’s hands. The only way to save Dad: get the pictures out of the country. Thus Mia and Simon set off on a harrowing journey to the border, without food, money, or shelter, in a land where anyone who sees them might turn them in, and getting caught could mean prison—or worse.

Anne Sibley O’Brien ’75 grew up in South Korea as the bilingual and bicultural daughter of medical missionaries. She has written or illustrated thirty-five picture books, and frequently speaks in classrooms across the country and in international schools around the world. This is her first novel. She lives on Peaks Island in Maine. 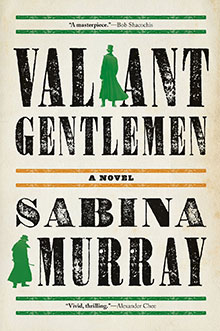 Valiant Gentlemen reimagines the lives and intimate friendships of humanitarian and Irish patriot Roger Casement; his closet friend, Herbert Ward; and Ward’s extraordinary wife, the Argentinian-American heiress Sarita Sanford. When World War I breaks out, Casement and Ward’s longstanding political differences finally come to a head, and when Ward and his teenage sons leave to fight on the frontlines for England, Casement begins to work alongside the Germans to help free Ireland from British rule.

Sabina Murray ’89 grew up in Australia and the Philippines and is currently a member of the MFA faculty at the University of Massachusetts, Amherst. She is the author of Tales of the New World, A Carnivore’s Inquiry, Forgery, and The Caprices, which won the PEN/Faulkner Award for Fiction. 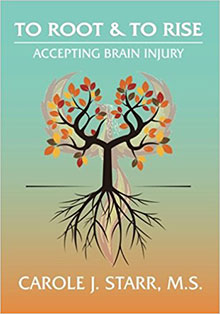 To Root and to Rise: Accepting Brain Injury

Carole Starr’s ’89 life changed forever in 1999, when she sustained a brain injury in a car accident. She was unable to continue her life as a teacher and amateur musician. It took Starr many years to accept her brain injury and the new person she became. She’s reinvented herself by focusing on what she can do. She’s now an inspiring keynote speaker and the founder and facilitator of Brain Injury Voices, an award-winning survivor education, advocacy, and peer mentoring volunteer group. 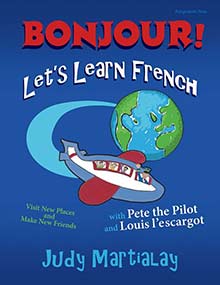 Bonjour! Let’s Learn French gives children ages six through ten an early and fun introduction to French. Kids board Pete the Pilot’s magic airplane en route to France. On board, they learn their first French words and phrases. In France, they meet Louis, l’escargot and his friends, and follow their adventure while learning French and absorbing the culture. The French words and expressions are introduced gradually during the story, which is told in English.

Judy Simberkoff Martialay ’59 was born in Mount Vernon, New York, and received a bachelor’s degree from Mount Holyoke College and a master’s from Columbia University. She taught foreign language in elementary school, middle and high school. During and after retirement she devoted time to public advocacy for foreign language education with the New York State Association of Foreign Language Teachers. Judy has traveled to Mexico, France, Spain, Italy, Algeria, China, Ethiopia, Greece, Israel, among others. She loves guitar, oil painting, and gardening. She lives in Sea Cliff, New York, with husband Javier and has two daughters and one granddaughter. 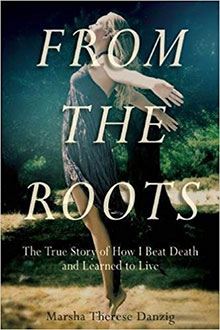 From the Roots: The True Story of How I Beat Death and Learned to Live

From the Roots explores one woman’s decision to find grace, hilarity, and ultimately joy, in the worst of circumstances. As a result of surviving childhood bone cancer twice, Marsha endures long-term side effects that include the amputation of her lower left leg. A rebel to the core, her defiance in the face of disease, doctors, and anyone who would steal her joy or life force offers moments of profound depth and humor.

Marsha Danzig ’84 is an author, speaker, healer, and yoga therapist. She is the founder of Yoga for Amputees(r). She works internationally as a yoga clinician, healer, and spiritual mentor. She is a below knee amputee. She lives in Dayton, Ohio.