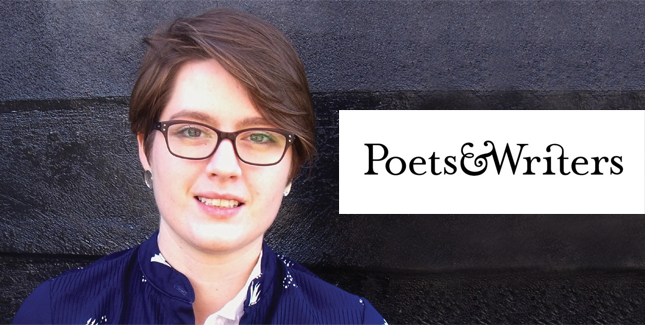 In the fall Holly Mitchell ’13 was named a recipient of Poets & Writers’ Amy Award, given annually to New York-area women writers under age thirty and named for Amy Rothholz, a 1979 Mount Holyoke alumna and promising poet who passed away at the age of twenty-five.

Originally from Kentucky, Mitchell was an English major at Mount Holyoke and received multiple awards from the College, including a Gertrude Claytor Prize presented by the Academy of American Poets. After graduation, she moved to New York and studied at the Poetry Project and New York University, where she earned a master of fine arts degree in creative writing.

At the 2017 Amy Award ceremony, held at the Grolier Club in Manhattan, Mitchell, whose poems have appeared or are forthcoming in Baltimore Review, Narrative Magazine, Paperbag, and Washington Square Review, read alongside her three fellow recipients, a young honoree in high school, and the esteemed poet Grace Schulman. Each of the award winners shared one of Rothholz’ poems and a few of her own, filling the room with the words of generations of women.

Rothholz, whose family collected her work in a posthumously published book, Iced Tigers, was known to write poems in the style of a poet she admired. Mitchell’s poem “And the Fullness Thereof,” shared here, was written using that same technique, a fitting similarity in a shared Mount Holyoke experience.

And the Fullness Thereof

after “As for the World”
by Yehuda Amichai

As for the world, I am a forehead
guiding dome & little else in the push.

As for my life, I am a reaction
wonder led a student to oxidize.

As for action, I walk after years
of listening in the seat of a Volvo.

As for the palm of your hand, I am
the orange held in its warmish shape,

reading the wrinkled print beneath.
As for the signals, as for the plans,

the writing, the place, the fertile drift
of spores in the air, I am like someone’s

inscrutable invention. And as for fate,
it’s not in my dusted makeup.

As for the silence, I am crumbs
palmed away from a wedding plate.

As for the cry, I am a butter knife
making serrated whispers into bread.

This article appeared as “Words to Live By” in the winter 2018 issue of the Alumnae Quarterly.