Margaret Wiss ’16 on the Intersection of Dance and Science 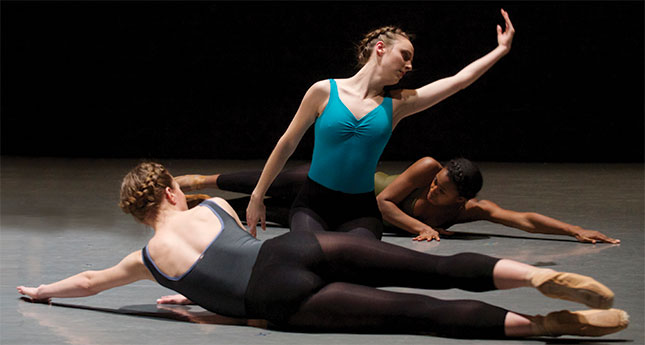 Margaret Wiss ’16 is interested in the interactions between dance and science. In her choreography she explores how dance and the environment—both inside and outside the body—interact, calling upon her dancers to share their own feelings and experiences as she begins each new piece.

In Superposition, her most recent production, which she created for the 2017 MHC Faculty Dance Concert in November, Wiss drew upon her work of the past year to create a composition for nine student dancers who interpret questions including, “How do you matter after you’re in a campus bubble?” The question is not intended to only be emotional.

“I did a lot of research into particle physics and the Big Bang theory—how matter started,” Wiss says. “I’m really interested in dance not necessarily as an art form but also how it relates in different fields, in the interdisciplinary sense. Most of my inspiration comes from science . . . and most of my choreography stems from scientific research.”

Wiss, who grew up in Boston the daughter of artists, began dancing at the age of three. She choreographed her first original piece when she was ten and brought her love for and dedication to dance with her to Mount Holyoke, where she designed a dance kinesiology major with long-term plans of becoming a physical therapist for dancers.

After graduation Wiss went on to choreograph original work for PDX Contemporary Ballet in Portland, Oregon; the DanceBARN Festival in Minnesota; and the Harvard Ballet Company. She also stayed in touch with her Mount Holyoke dance teachers, and when she returned to campus to attend the 2016 Faculty Dance Concert professors James Coleman and Terese Freedman made her an offer she couldn’t refuse: returning to Mount Holyoke to teach. This past fall, Wiss joined the department for the semester as a visiting artist to teach classes in pointe and repertory, where students learned Superposition.

The residency was a success. Over three days in November, student dancers from the five colleges performed at Mount Holyoke in Kendall Hall’s dance studio before sold-out audiences. Wiss was one of the five female choreographers whose work was showcased during the performance.

The weekend was a near culmination of her time at Mount Holyoke, as her residency came to an end in December. “Returning to Mount Holyoke has had a profound impact on me as an alumna and an artist,” says Wiss. “To the MHC and Five College dance community: thank you.”

This article appeared as “Interpretations in Movement” in the winter 2018 issue of the Alumnae Quarterly.