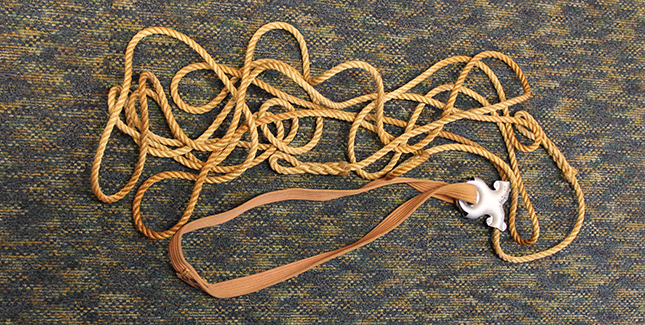 At 34 feet long and about a 1/2-inch thick, this fire rope shows little wear and was likely never used. Photo by Millie Rossman

Last spring, in a box of materials received from members of the Mount Holyoke class of 1922, staff at Archives and Special Collections discovered an original dormitory fire rope.

Before fire escapes were widely installed on campus buildings students relied on these ropes—which were kept in each dorm room—for escaping from their residence halls in the event of a fire. Fire drills were held in Blanchard gymnasium, during which students were required to practice securing the ropes and climbing down the side of the building to safety.

In 1980, according to a letter from Wayne Gass, director of physical facilities, the College’s insurance company advised that the use of the ropes should be terminated as a “secondary means of escape.” Students were subsequently asked to turn in all ropes.

Did you ever use a fire rope? We’d love to hear from you at quarterly@mtholyoke.edu.

This article appeared as “A Great Escape”  in the fall 2017 issue of the Alumnae Quarterly.